To close out our last trip of 2017, we dreamed big. Since we wouldn’t be going home to Nashville for the holidays, we decided to spend Christmas with Santa in the North Pole – or rather Northern Norway. To kick off the trip, we spent four nights in Tromso, followed by three nights in Alta, and ended with a night in Oslo. Keep reading for the highlights of our adventures 🙂 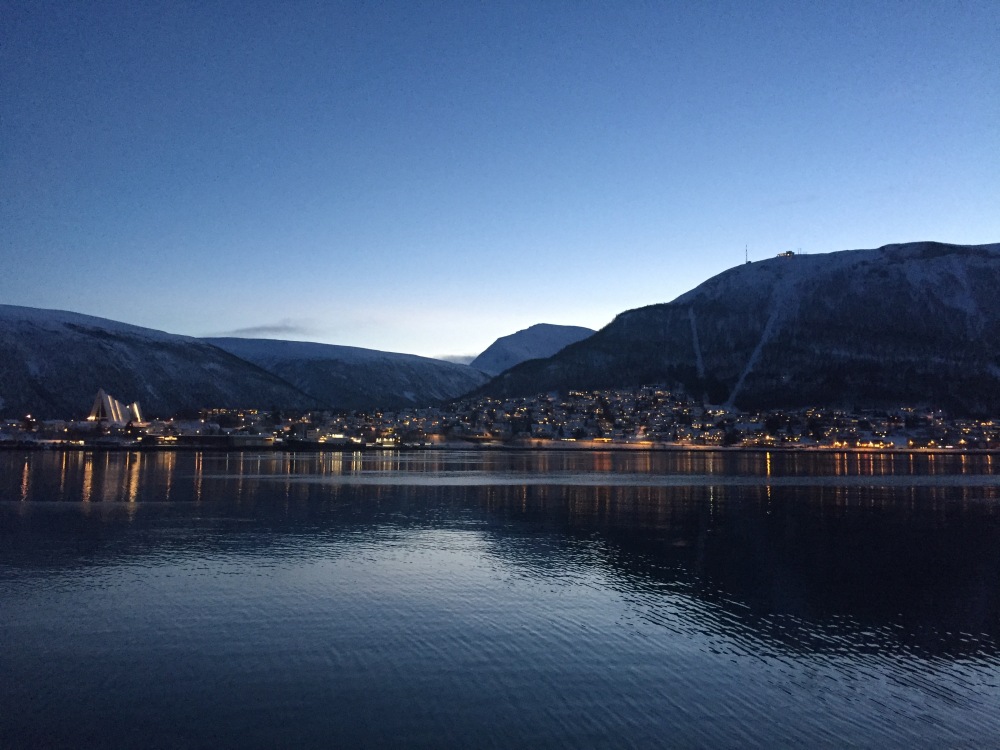 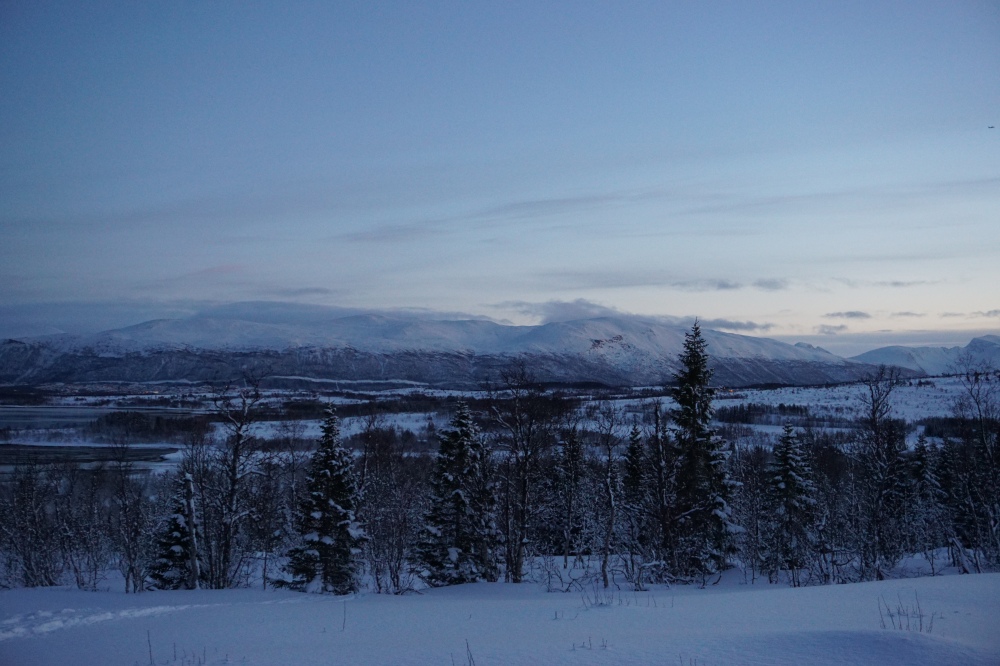 We arrived in Tromso pretty late on Friday evening after some weather delays, but made it to our dinner reservations at Mathallen, a cute Scandinavian restaurant where we ordered the for course tasting menu, and where I also tried reindeer for the first time. My first reindeer experience was subpar. I thought it tasted gamey and felt bad about eating Rudolf, but little did I know it was basically the only option for food and I ended up growing to like it more each time.

After our dinner we walked back to the hotel, the Scandic Ishavshotel, in a blizzard. Apparently we lucked out because the day we arrived it snowed a ton and before that there wasn’t much snow which would have been disappointing. 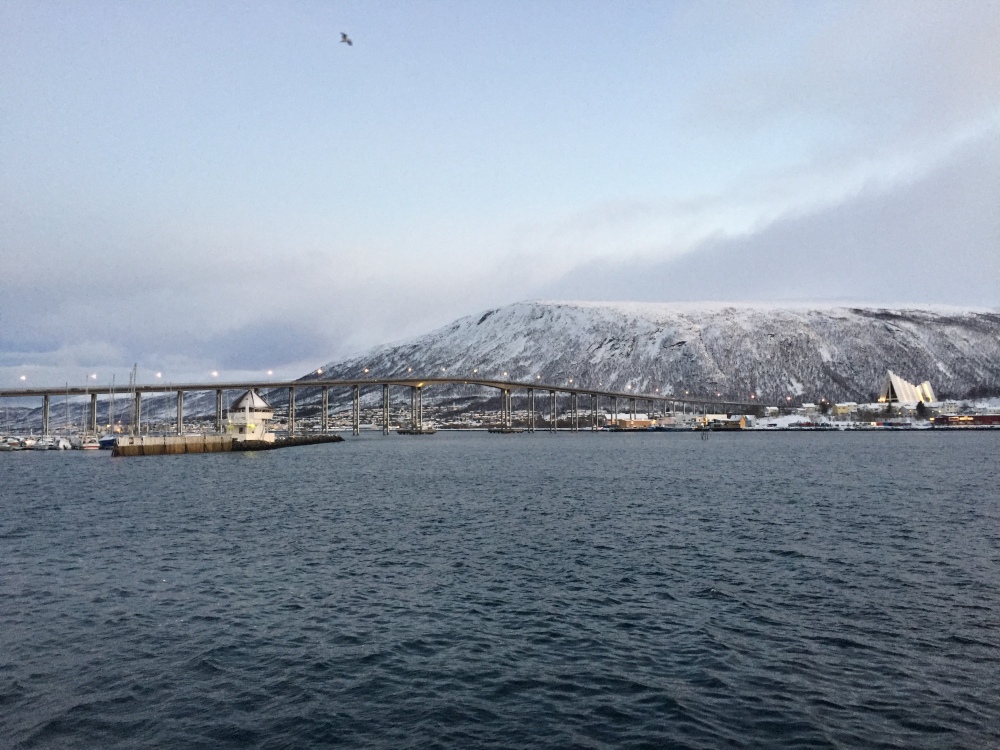 On Saturday we had originally scheduled an overnight trip including a snow mobile tour and sleeping in a lavvu (aka teepee) with a glass roof so we could see the Northern Lights. Unfortunately because of the lack of snow, snow mobiles couldn’t operate so instead we did a snow shoe excursion.

Our guide was a spunky little Italian lady who got us bundled in up some intense cold suits and drove us in her Tesla across the island to start our hike. 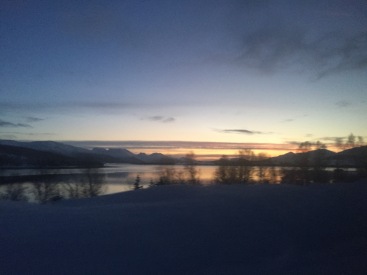 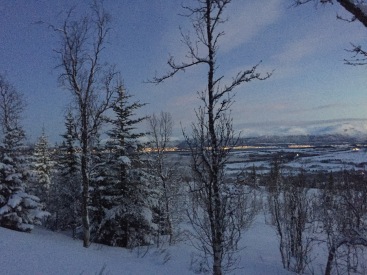 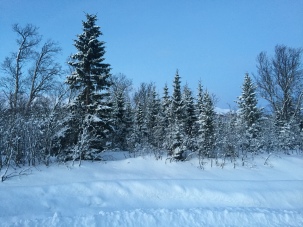 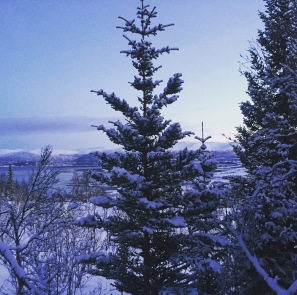 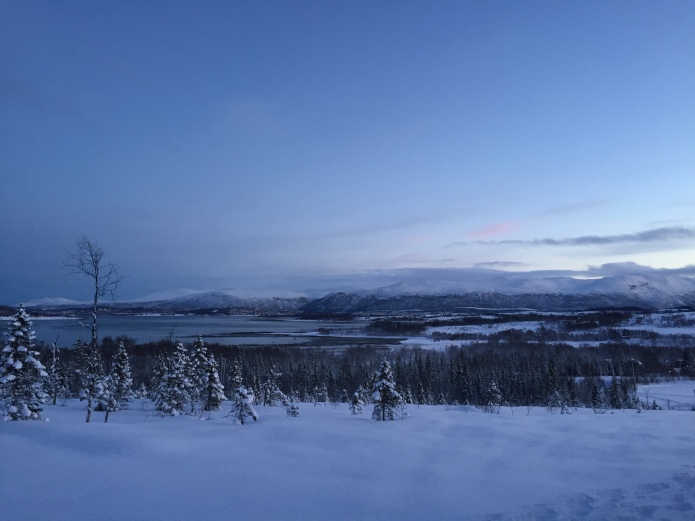 We were lucky that the skies were clear during the day, and our guide said it was one of the clearest and lightest days she had seen in a while. That news was pretty sad to me because it got light around 10:30am and dark again around 2pm and the sun never broke the horizon. 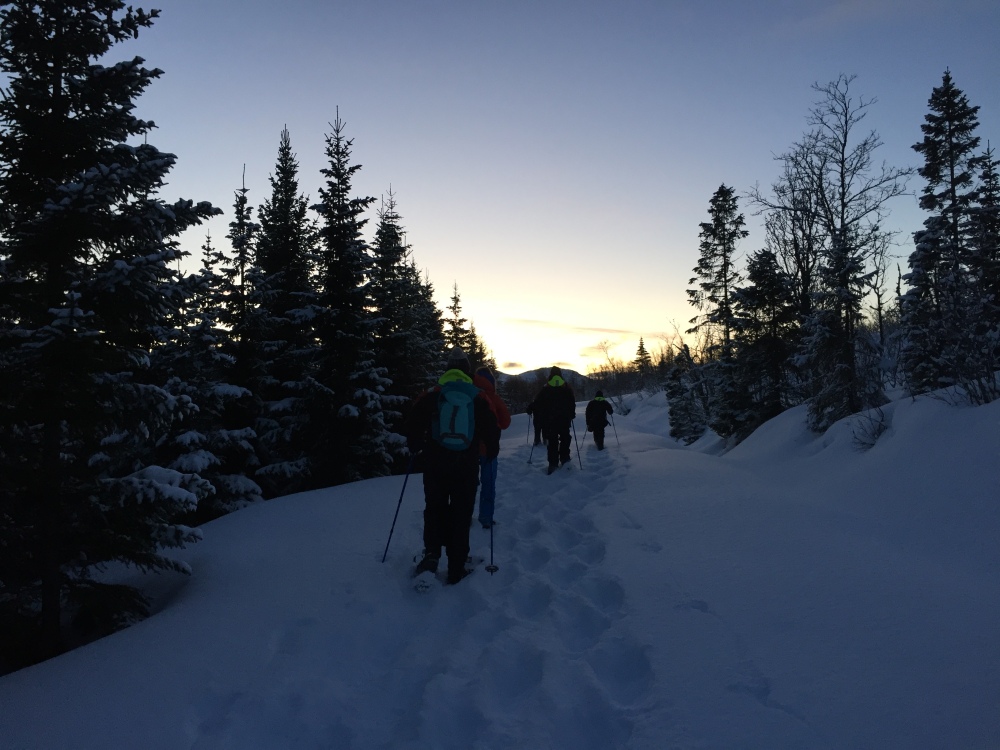 Anyway, we enjoyed her stories while we walked through the beautiful forest on top of a few feet of snow. 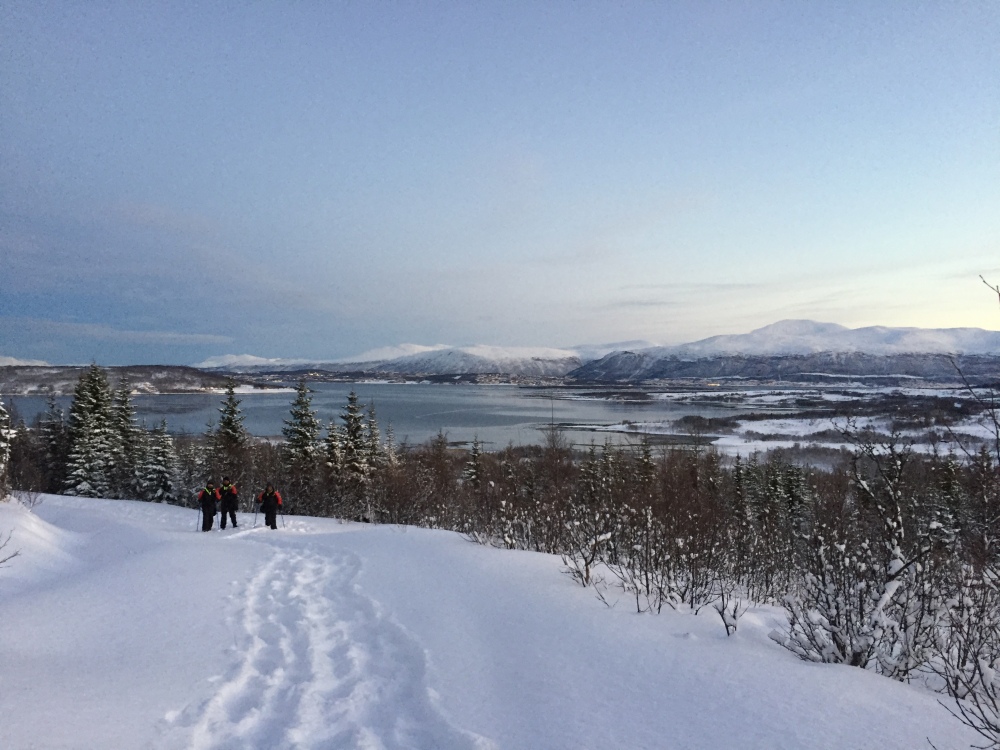 One of the people in our group lost his snow shoe and stepped into the fresh powder and sunk past his knee. Deep snow. 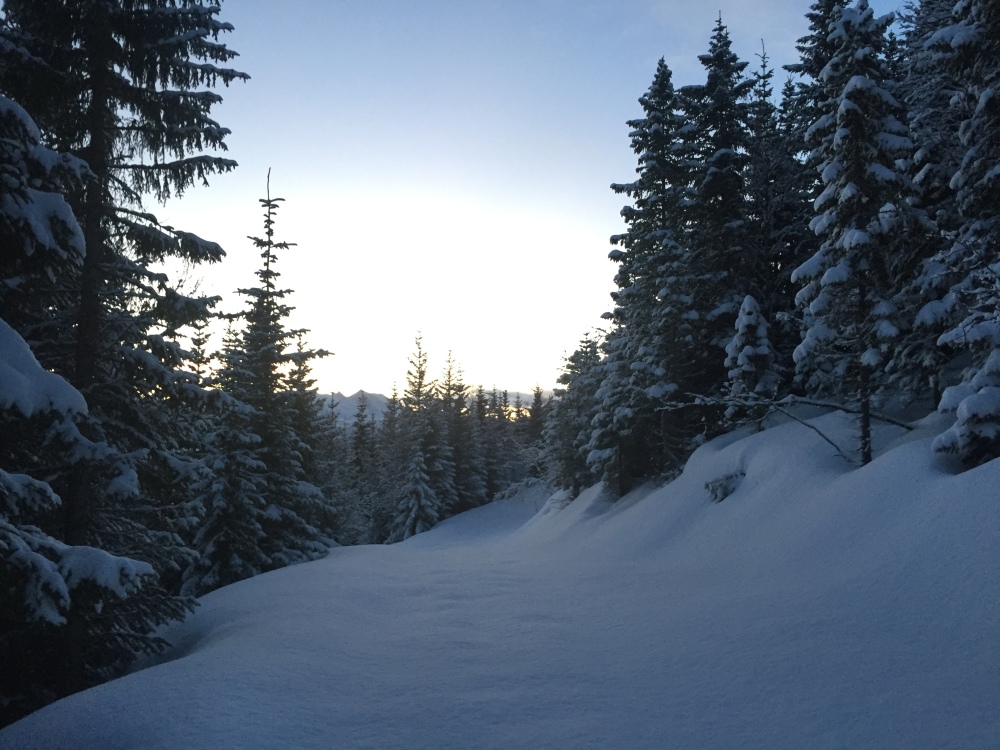 After the tour we got ready for our overnight stay in the glass roof teepee. This was probably the thing I was most excited for on our whole trip and was definitely the biggest letdown.  We didn’t realize the lavvus were a 2 hour car / ferry ride away. We arrived at what was kind of a bed and breakfast with 6 lavvus on the property.

The host was not very friendly and basically said there was no chance we would see the Northern Lights that night because the skies were too cloudy. So Tyler and I played a few rounds of cards and then retired to our lavvu which was heated by campfire, which Tyler had to keep going.

We woke up around 3am to see if the lady was wrong and the skies were actually clear. Unfortunately, they weren’t and we stayed outside staring up at the sky for about 20 minutes, hopeful. We saw no lights that night, but we had several more chances so I wasn’t super concerned.

The next morning we woke up and drove back to the city. We visited the Polaria museum and watched seals swim around for a while and then took in the Christmas Eve church service at the Arctic Cathedral. 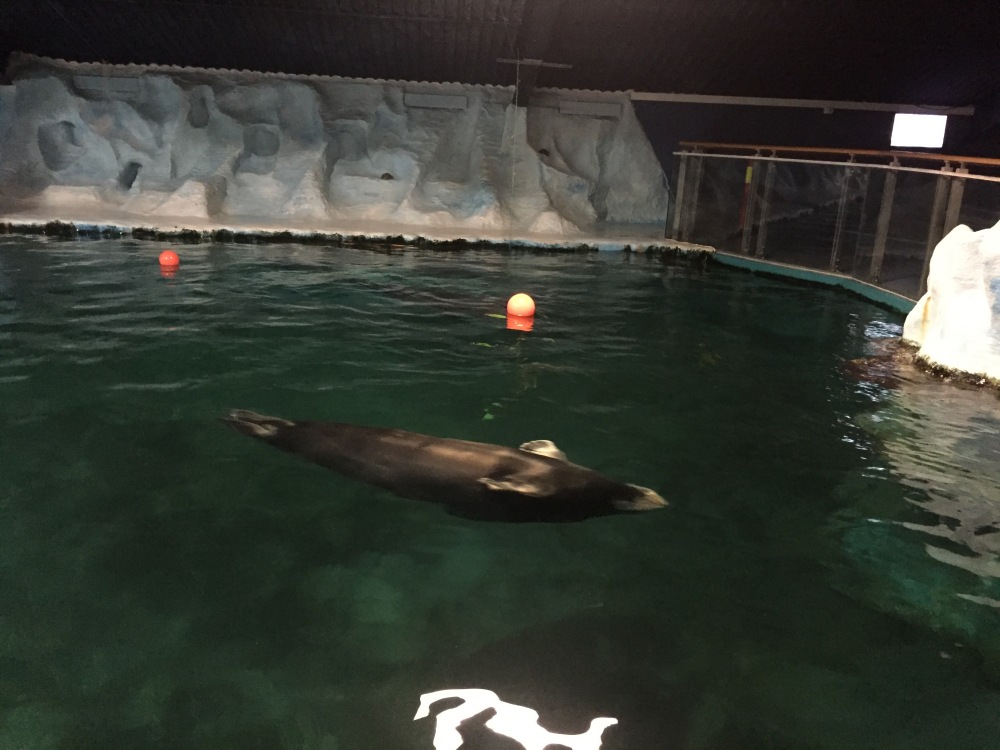 The cathedral was beautiful, a real work of art. The service was all in Norwegian, but we could understand a bit of what was going on because they were putting on a play about Jesus. Also, it was kind of funny because all of the songs had the same tunes, but Norwegian words, like Silent Night.

A couple that Tyler had met at an EY training in Amsterdam from Luxembourg happened to be in Tromso at the same time, so after the church service, Tyler got in touch with them and they were planning on joining a NL excursion that night so we decided to join. Best decision ever. 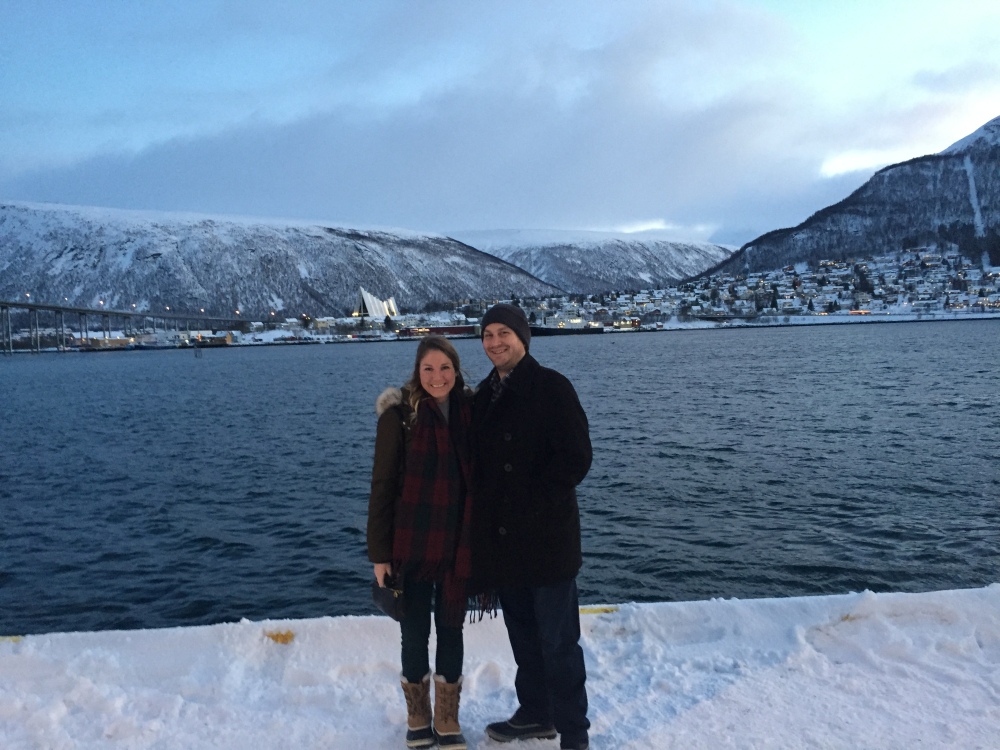 We heard the skies were supposed to be clear so so there was a good chance for a show. We embarked on our journey with about 12 others and a crazy Italian guide named Sal. He explained what the lights were and where we were heading – about 45 minutes west of Tromso. We got lucky because earlier in the week people on the same tour were having to drive 3 hours away to Finland where it was -20* C to see the lights.

After about 45 minutes of driving, we pulled over on the side of the road and hopped out of the car because Sal saw activity. We were on the side of the road overlooking a small town with lights and there were clouds, so the NL weren’t that clear, but we saw them! for the first time! They looked like whitish whispy streaks in the sky. Sal taught us how to take pictures and we struggled to find the right settings, but snapped a few pics. 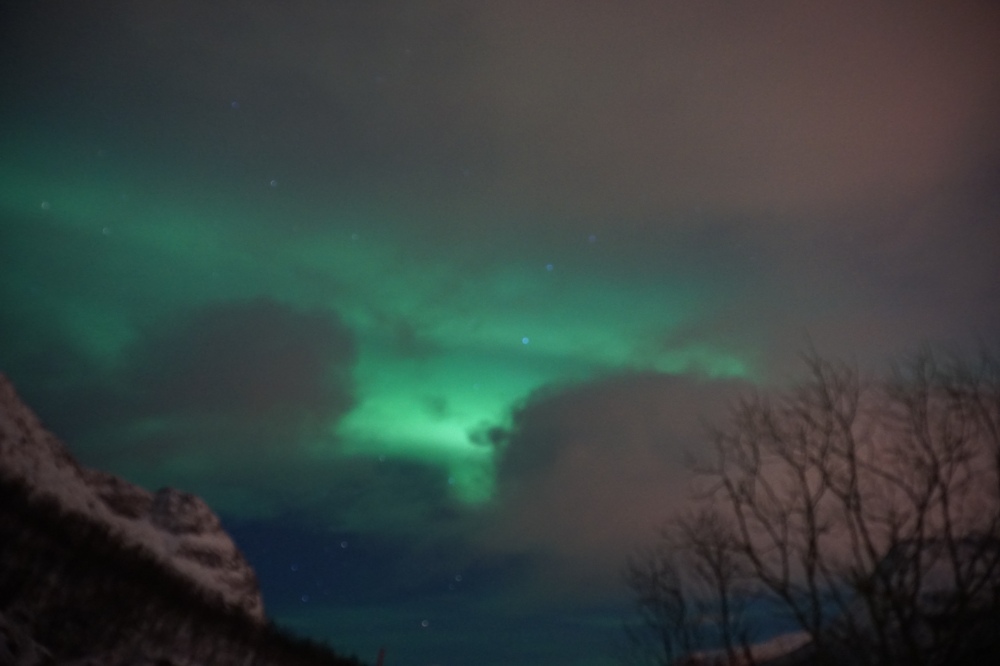 Sal was convinced we could do better, so we hopped back on the bus to go around the mountain near a lake. The next place we stopped at was very scenic with the lake and mountain, However it was still pretty cloudy. But regardless, we saw some activity and had some hot chocolate. 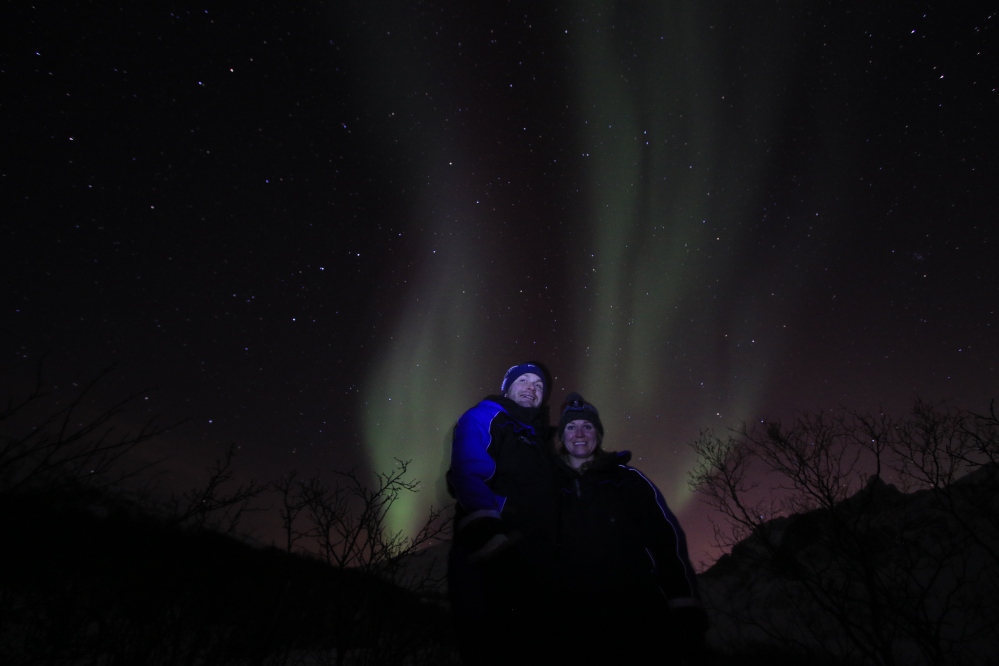 I guess third time’s a charm because we got back on the bus one more time and went to a remote spot nestled in the mountains. The skies were clear, but the light activity was low, so we made a fire and had some dehydrated meals (aka astronaut food). I wouldn’t really recommend it.After the food we set up our tripods and cameras to wait for the lights. All of the sudden, the lights were in full force. 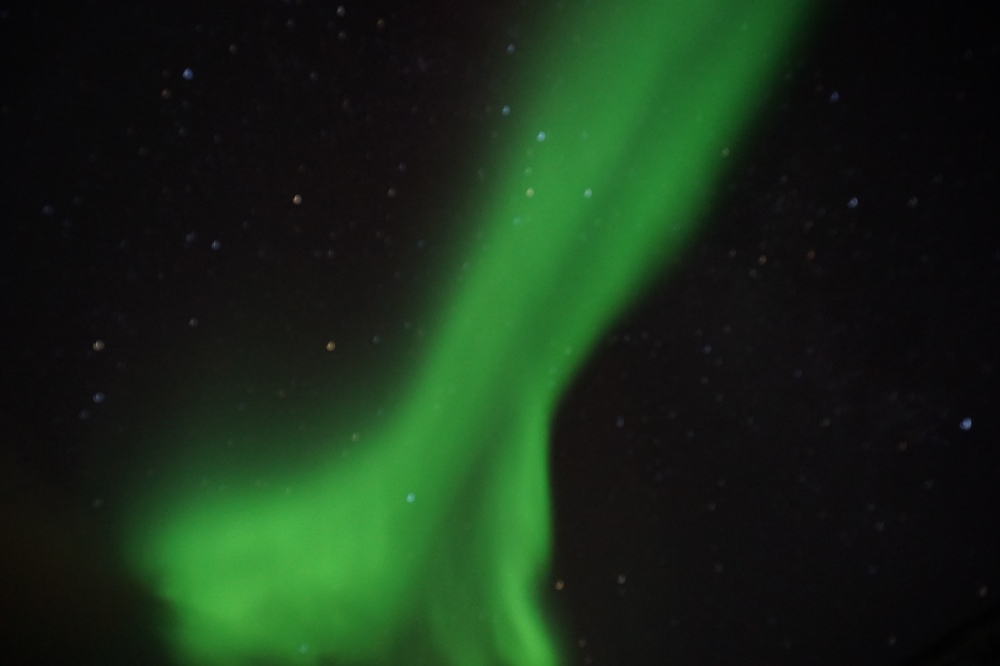 Instead of looking like whispy clouds, they were more defined and brighter. 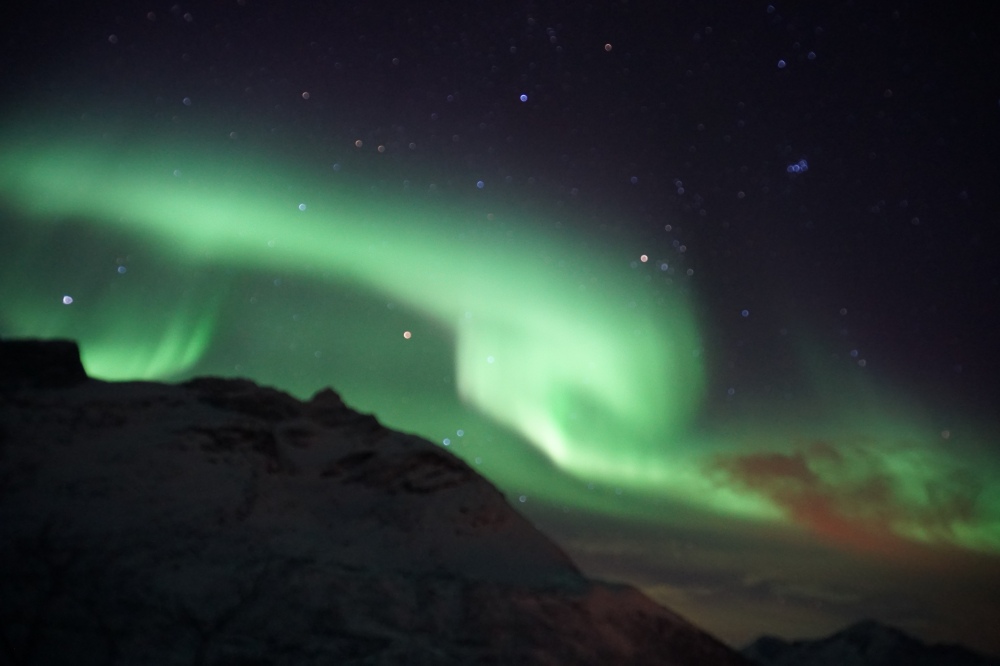 At one point there were so many coming out of the mountain that we all stopped to stare. 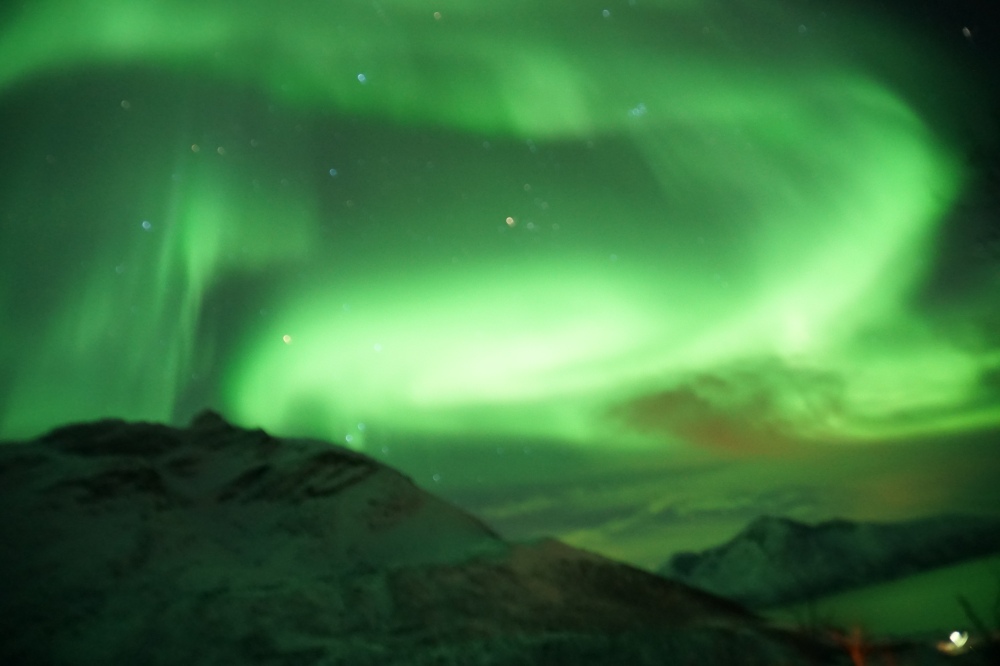 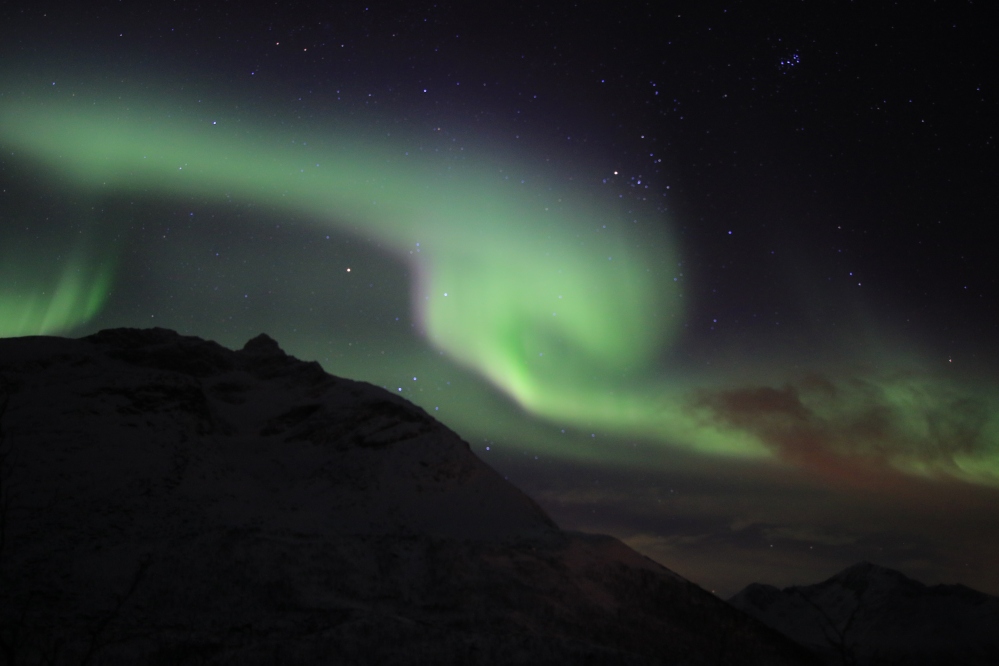 They started dancing across the sky and we saw not just white but green and pink streaks too.

It was the most spectacular thing. It got to a point where the lights were so intense that I started to get scared because it was lie nothing I’ve ever seen before and in my mind I was comparing it to aliens.

This intense light show happened for about 5 minutes and we alternated between snapping pictures, clapping, and calling out in joy.

I can’t believe we saw them dance! It was so surreal. 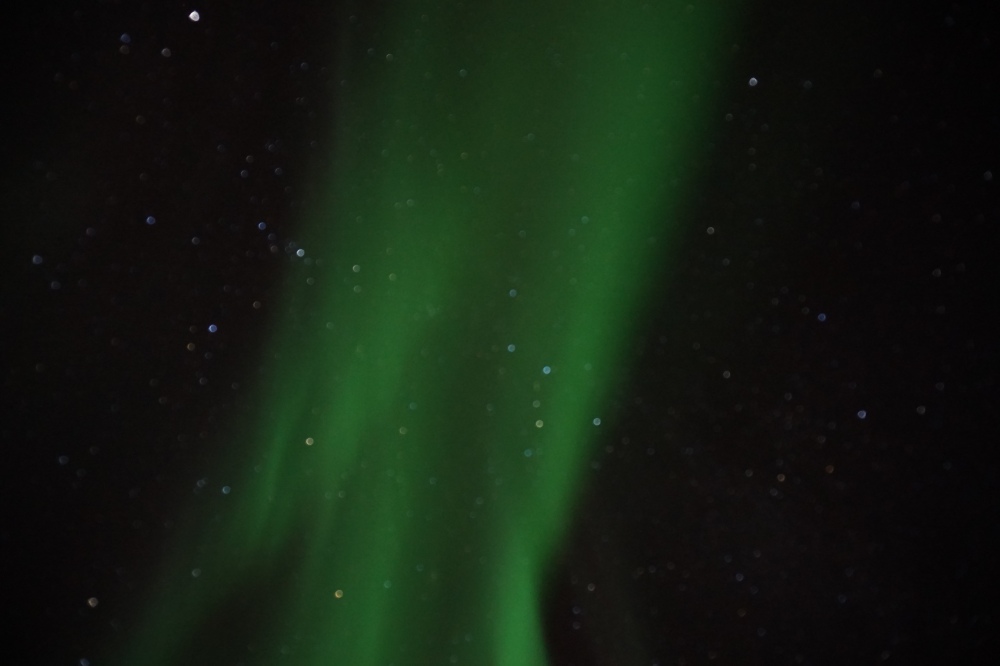 Our guide said it was the best show he had seen all year. They literally covered the sky.

At some point we realized it was past midnight and had turned into Christmas. We joked that Santa brought us the lights.

Even though it was late, we didn’t want to leave because just when we would start to talk about packing up the lights would grow in intensity and start dancing again. How could we leave when we were experiencing something so incredible that we would likely never see again? So we stood for longer as they swirled and twirled through the sky. It definitely exceeded my expectations.

Because Sal had taken us to such a remote place, we almost got stuck there. 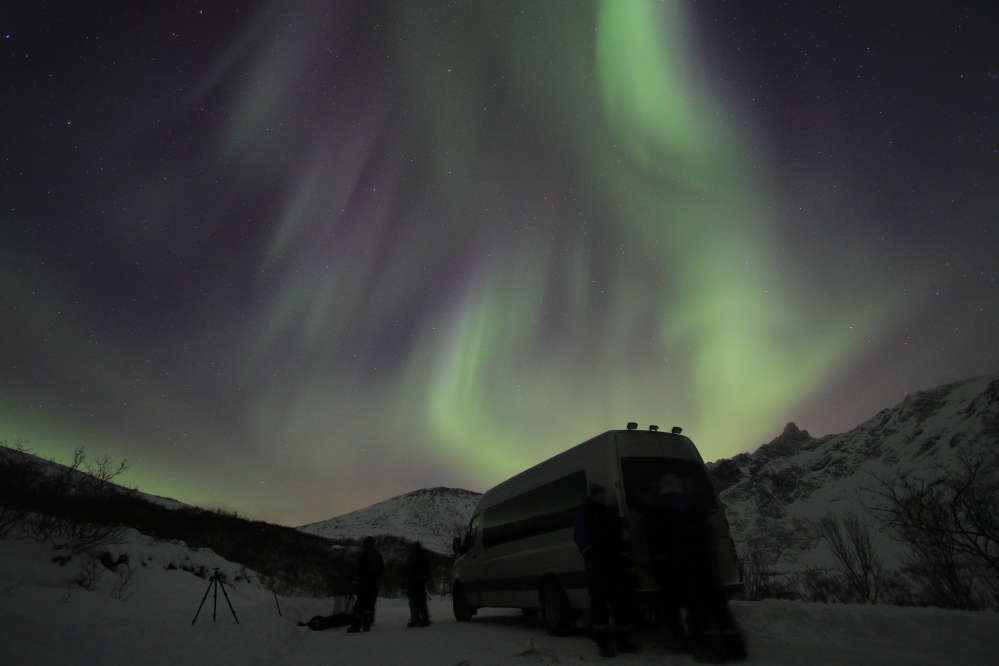 The driver had to get out the chains to put on the tires and we barely made it up this huge mountain back to civilization. I had made friends with the driver and he said he would never bring people to this spot again because it was unsafe. But I’m so glad we were the first and last crew! After we were out of harms way I fell asleep and we arrived back at the hotel around 2:30am.

On Christmas day, we woke up after about 5 hours sleep to catch our whale watching boat by 8. Because the whales have stopped traveling into the fjords near Tromso, instead of our original tour on a catamaran with a group of 8, we had to take a big ferry boat that could go faster and make it to the best whale watching area. 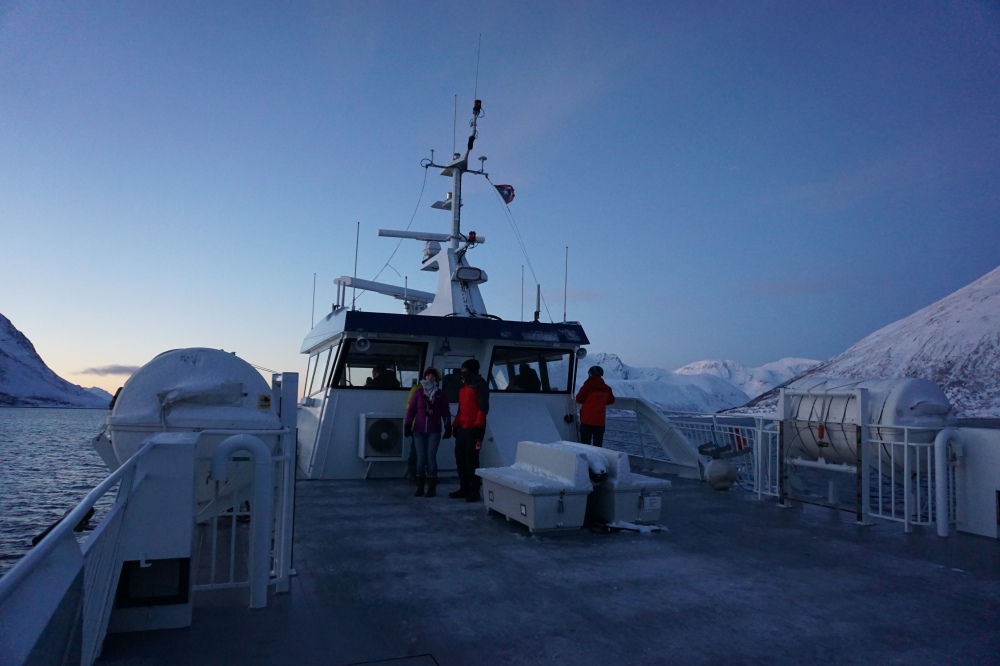 The scenery on the 2 hour journey to the whales was amazing as we were traveling through the fjords in between snowy mountains and along scattered villages. 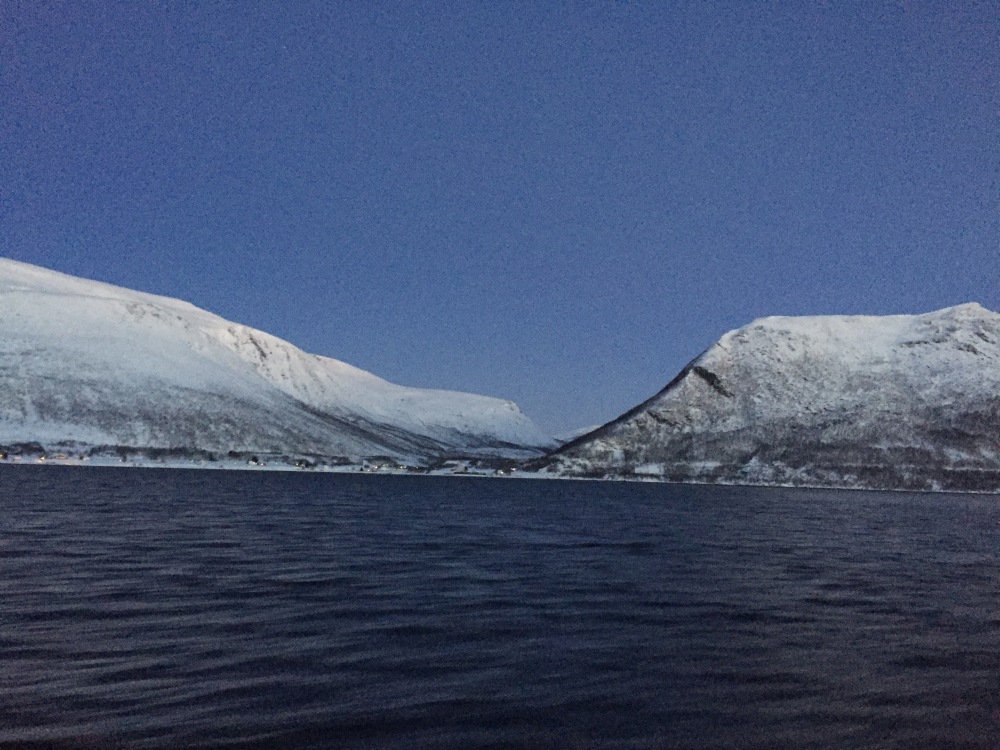 I was amazed that people actually lived in such remote places.

Once one of the captains spotted whales, we all raced outside to get a better view. It was freaking cold. But we saw about 6 humpback whales traveling together that would blow their spout and then dive underwater to feed and give a big tail flip.

I was a little disappointed that we didn’t see any Orcas because I love Free Willy (don’t call them killer whales because that’s mean and they don’t kill people unless they’re held in captivity at Sea World). We also saw a white winged eagle soaring through the sky which the guide was pretty stoked about. I guess he sees whales all the time.

For Christmas dinner, we met up with Tyler’s friends and had a fancy dinner booked. I once again sampled the reindeer and this time I really enjoyed it. We had some good food and good wine and got to know some new friends. It was definitely the most different Christmas I’ve ever had, but we really enjoyed it.

Stay tuned to hear about our time in Alta and Oslo!