Colmar might be the cutest Christmas city in the world. It seriously looked like a fairy tale. Like maybe where Hansel and Gretel ate the gingerbread houses.

And they sure do know how to throw a Christmas market. The whole town was decked out in it’s best green and red, and the markets sprawled across many squares into 5 separate markets.

After our bad luck with getting the dates wrong for the Ghent Christmas market the previous weekend, we were pleasantly surprised with all the festive cheer in Colmar.

To get to Colmar, we flew into Basel with our friends Matt and Maddie and rented a car to make the short 45 minute drive to Colmar. There was bad weather in Amsterdam and many flights were cancelled, so we were really happy that our EasyJet flight wasn’t even delayed! However, it was a pretty bumpy take off and flight in general, where we were swerving from side to side on the runway on the way up. Kinda scary.

We rented an AirBnb for the weekend and it was so quaint! As Maddie put it, kind of like Aunt Carol’s house in Ohio. There were cat statues everywhere, so naturally I loved it. The hosts left us a bottle of champagne and some cookies so we tried to order a pizza to settle in and play cards. 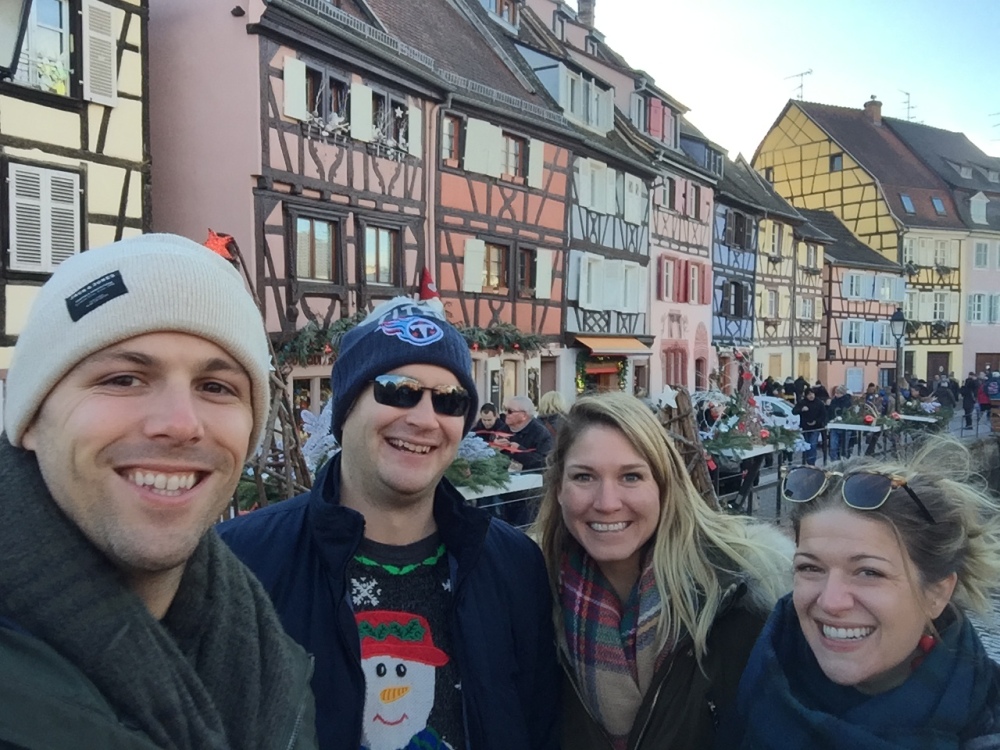 Unfortunately the delivery guys at the Pizzeria 4 Saisons did not speak any English and as Tyler’s French didn’t cut it, so we hopped in the car to order in person (by pointing at things on the menu). This was a better strategy and we got some pizza, some heavy heavy tacos (loaded with french fries), a cheeseburger, and chicken wings. I think this place is probably better suited for late night food because it was pretty terrible, but we were starving so we ate it while playing Euchre.

On Saturday our only plans were to visit the markets, so we slept in and enjoyed some coffee (out of the cat mugs) and a light breakfast at the AirBNB before heading into the action. Luckily there was a train station nearby that took us directly into town for free!

I guess other people think that Colmar Christmas markets are pretty great too because it was significantly more crowded than Vienna and Ghent. Our first priority upon entering the market was of course Gluhwein and we got some adorable stocking mugs.

Our time at the Christmas markets was spent wandering around in awe of the precious little town, in search for food / Gluhwein (aka Vin Chaud), and finding places to warm our toes indoors. Luckily, those are some of my favorite things to do!

Some of the highlights were:

We found a bunch of really big dogs that I suspect were Newfoundlands who were used as search and rescue dogs. They were so cute and so big.

We went inside this restaurant that said it was full and asked if we could eat there and they let us! We had some flambee, which is basically a flatbread and some Christmas beers. It was a perfect spot to warm up. 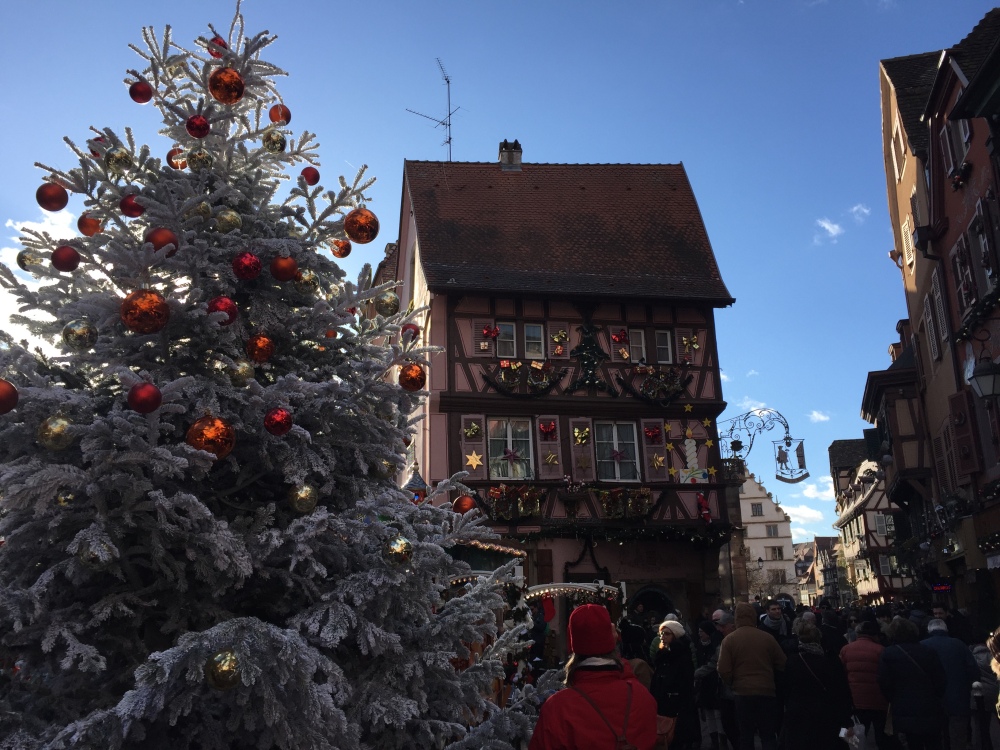 We learned that the guy who made the Statue of Liberty was from Colmar and saw the museum dedicated to him. The town had a bunch of little triangle shaped gold tiles around town that had a picture of the statue.

We had a really good dinner

We saw some sheep / goats with crazy eyes 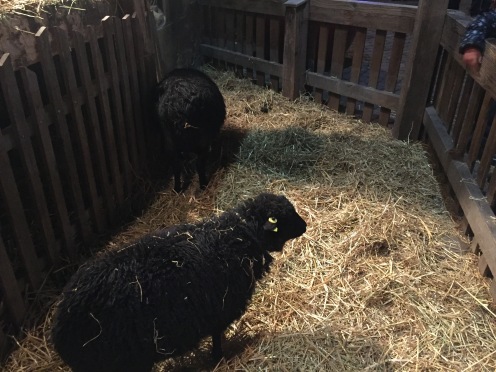 It was such a fun weekend with great company that it almost makes up for the terrible Sunday. Our flight was at noon so we left the AirBnb around 9 to ensure we had enough time to drop off the rental and get through security. It started snowing pretty heavily on our way to the airport, but we weren’t too concerned. We got through security and got a quick bite to eat before heading to passport control. At passport control we learned that all flights to Amsterdam for the day were cancelled. We had three options: rent a car and drive 8 hours, take a train 7.5 hours, or fly out at 6am the next day which wasn’t guaranteed to leave.

Apparently there was a huge snowstorm in Amsterdam and they shut down the whole airport. Since we weren’t sure of the road conditions in Amsterdam, we opted to take the train back. So, we took a bus to the train station, only to learn that it’s cheaper to take the train out of Germany than Switzerland. So we took a tram to the other Basel train station. Once there, we purchased train tickets to Frankfurt and Amsterdam. Since we were so late, we couldn’t get reserved seats and had to hop around each time there was a stop until ultimately settling in at the cafe where we could play cards.

We all went through a serious rollercoaster of emotions when we realized that the 40 minutes we had allotted for our connection was dwindling. And then we stopped at some random stop for 20 minutes for no reason.

Upon our arrival in Frankfurt, we raced to the platform our train was at and high five’d each other when we saw our train was delayed 20 minutes and would be arriving anytime. Then an announcement came over the loudspeaker in German and everyone got pissed off and left. We learned that the train to Amsterdam was missing a part and was cancelled. But we did get McDonalds which was a big plus for our hungry bellies.

So we took a different train to the Frankfurt airport and waited for a train to Amsterdam. When we finally got on the train we were relieved that we were almost there and would arrive by 10pm (instead of our original flight which should have been in at 1pm). However, this train was a slow one. And we had to stand up for almost the whole journey. But we eventually got a table and played some cards and made it back to Amsterdam at midnight. Not quite the way I pictured myself spending my Sunday, but if couldn’t have been in better company. The Kroll’s even taught us their family card game! 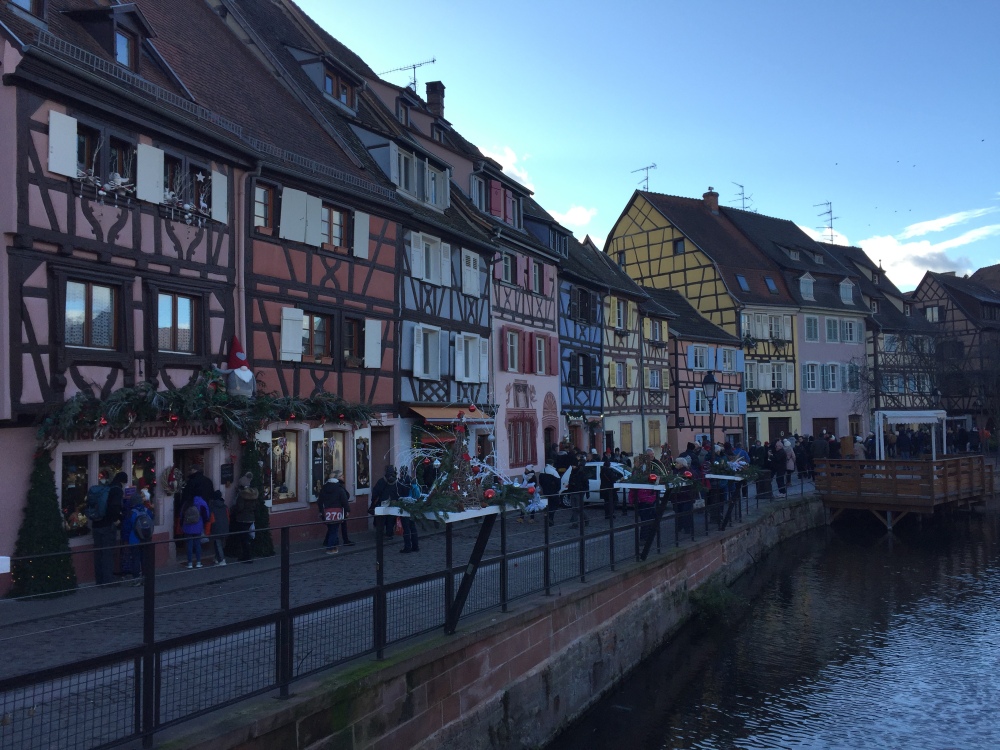