September was a busy month with visitors who stopped in Amsterdam before and after the main attraction: Oktoberfest, aka 1 of the top 10 items on my bucket list. And I’d have to say, it is all it’s cracked up to be.

We decided to head to Munchen for the opening weekend of Oktoberfest and went a day early to do some of the tourist attractions. Upon arrival we immediately went to a biergarten called Augustiner because Tyler heard that they served the best beer in the city. The beer was delicious and I had my first round of German food, deciding to go with the kaas spatzle. After downing our liters in preparation for the real deal the next day, we headed out to the BMW factory.

Tyler is a big fan of the beamers and I even enjoyed the show room that has all the new models. Thinking about getting a bike.

Although the show room had some fancy cars, I preferred the museum which showed the history of BMW dating all the way back to the early 1900s. It was interesting to learn about the history, especially during the war when BMW made engines for planes. 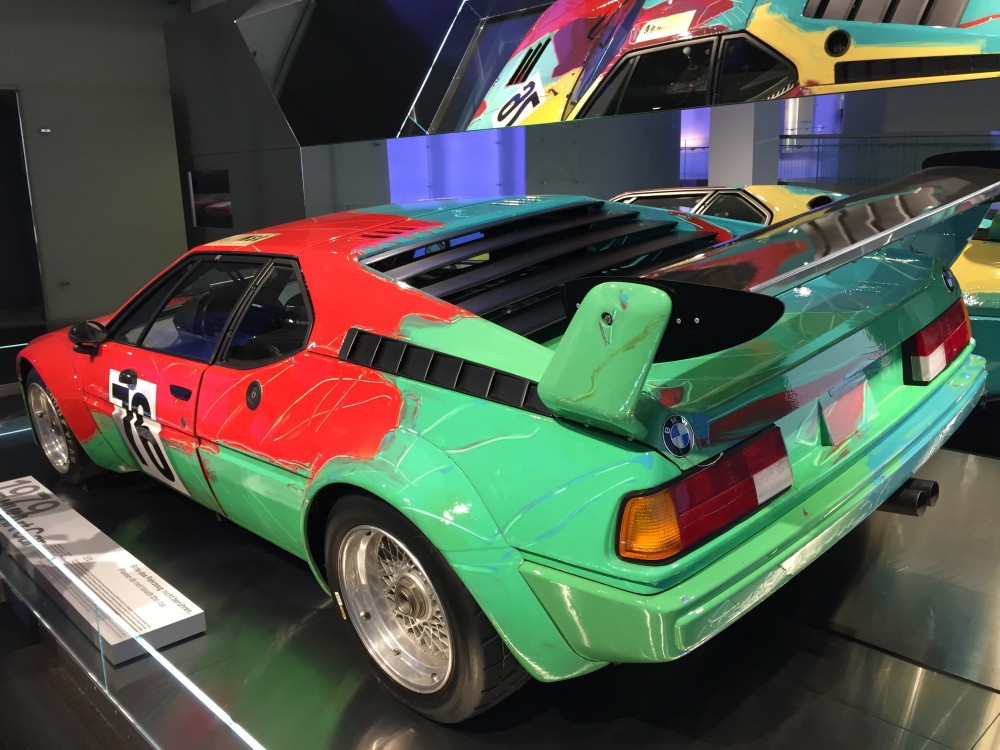 After BMW the crew (all 11 of us) headed to dinner at some rowdy German restaurant for meat, and lots of it. It was great to catch up with some of our old friends from Nashville and introduce them to our new friends. To cap the night off, we headed to Hofbrau Haus, because no trip to Munchen is complete without a stop here. I had SO MUCH fun. Everyone ordered a liter of beer and we sat at a table singing German drinking songs that we didn’t know the words to. I didn’t think that the night could be topped.

Luckily for me, the first day of Oktoberfest was even better than the night before! It started out a little stressful since we did not have reservations at a tent. Our friends Matt and Maddie had gotten to the Marstale tent really early and we went there to meet them. Only half of our group was able to get in the tent at first and there were no tables in sight, so we were frantically searching for somewhere to sit. I went back outside to collect the others when Tyler informed me that a table had opened big enough for the 11 of us! A true Oktoberfest miracle! 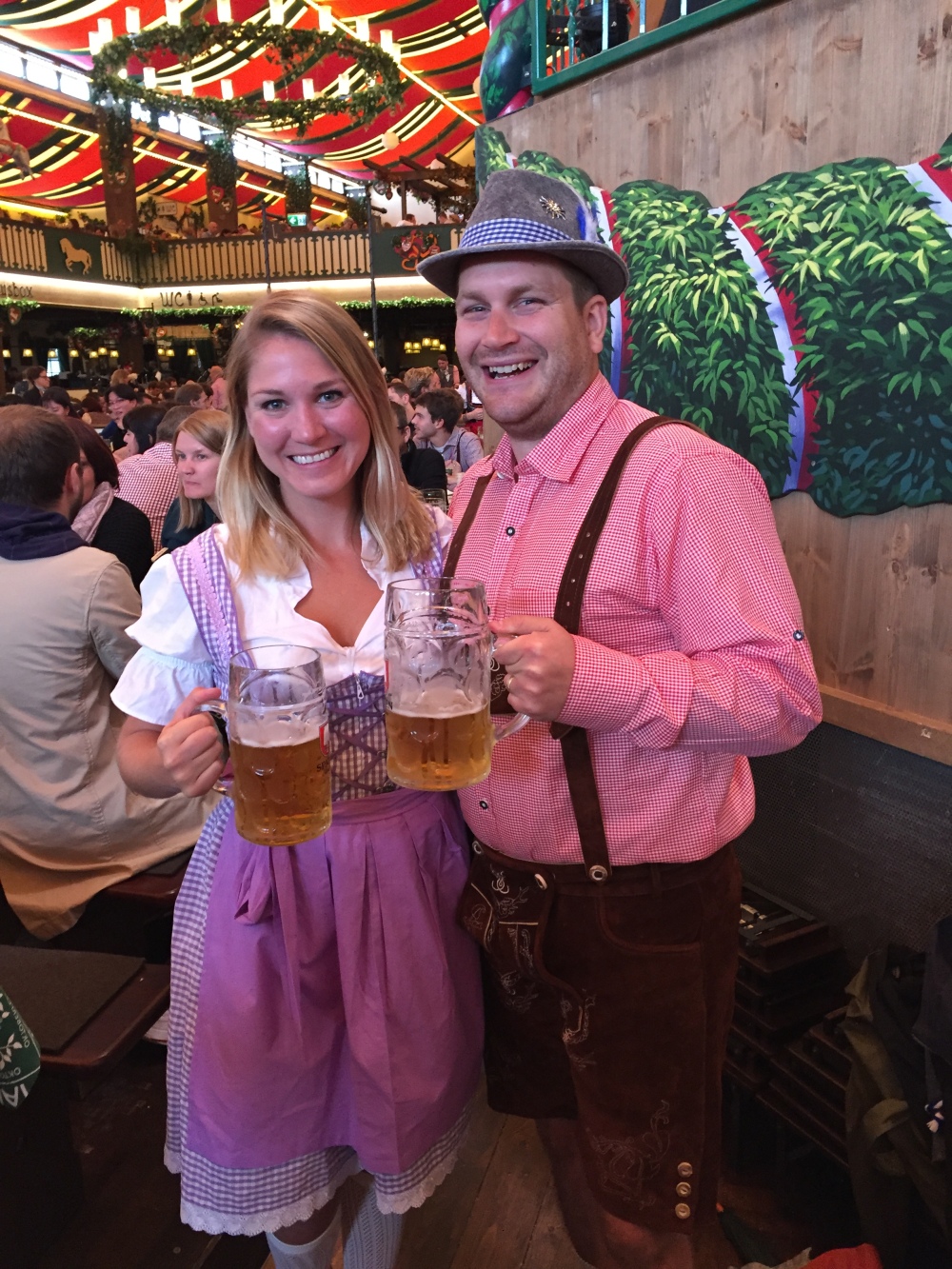 The tents are really more like buildings that are up year round and they are bigger than I expected. We only had the table for 3 hours so we got started right away by ordering a round of liters and some giant pretzels. 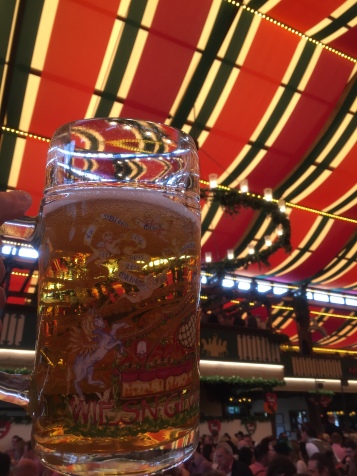 One of my favorite parts of the day was that people randomly burst out in German drinking songs and would stand up on the table to finish their beer to everyone’s cheers. Those who did not finish were greeted with Boo’s and items being thrown at them. The heroes of the day definitely had to be the servers who could carry up to 12 liters of beer per trip! 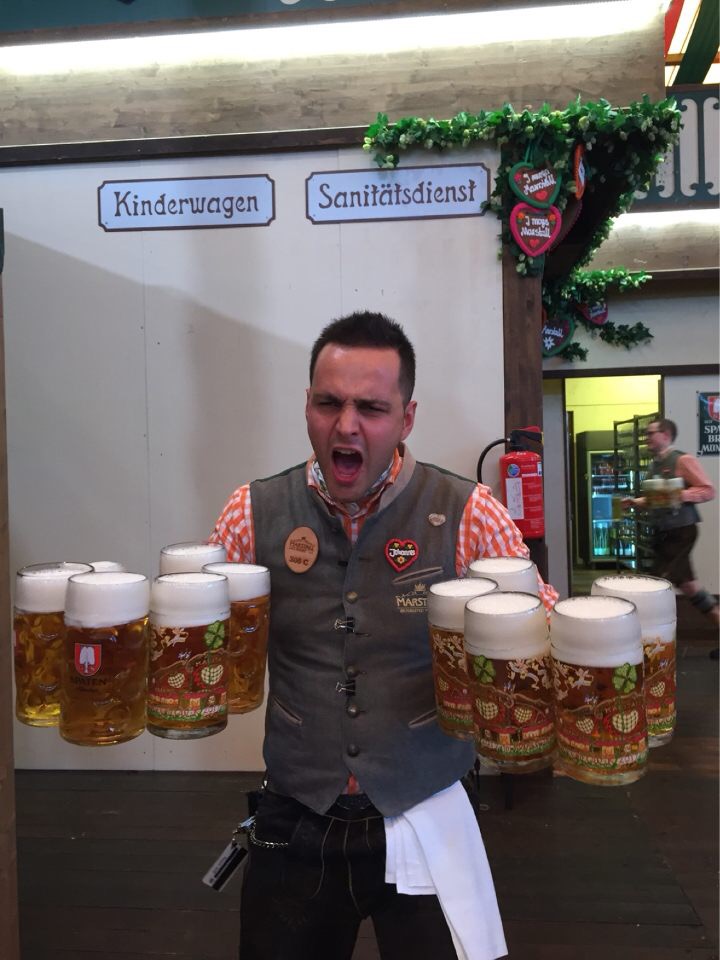 After our reservations were over, we walked around the fair and tested out some of the rides including my personal favorite, the bumper cars. The bumper cars really took a toll on me because afterwards I had to go back to the hotel and have a little cat nap. Luckily I woke up in time to watch the UT vs FL game on my phone. It was a very intense game, and we ended up tying with about 50 seconds to go. Since it was 1am Oktoberfest time, I decided that I couldn’t stay up for overtime and went to sleep. Once I awoke on Sunday I was shocked to learn that FL had scored on a Hail Mary at the last minute to defeat the Vols. What a bummer.

Because we called it an early night on Saturday, I was pumped for our reservations at noon on Sunday. Somehow I had scored a table at the Hofbrau tent which included two liters of beer and a half a chicken per person. The Hofbrau tent was about twice the size of the Marstale tent and about twice as rowdy. People were constantly getting up on their tables to chug beer. It was quite a sight to see. We spent the day drinking beer and singing German drinking songs in our dirndls and lederhosen. I can’t imagine anything better. 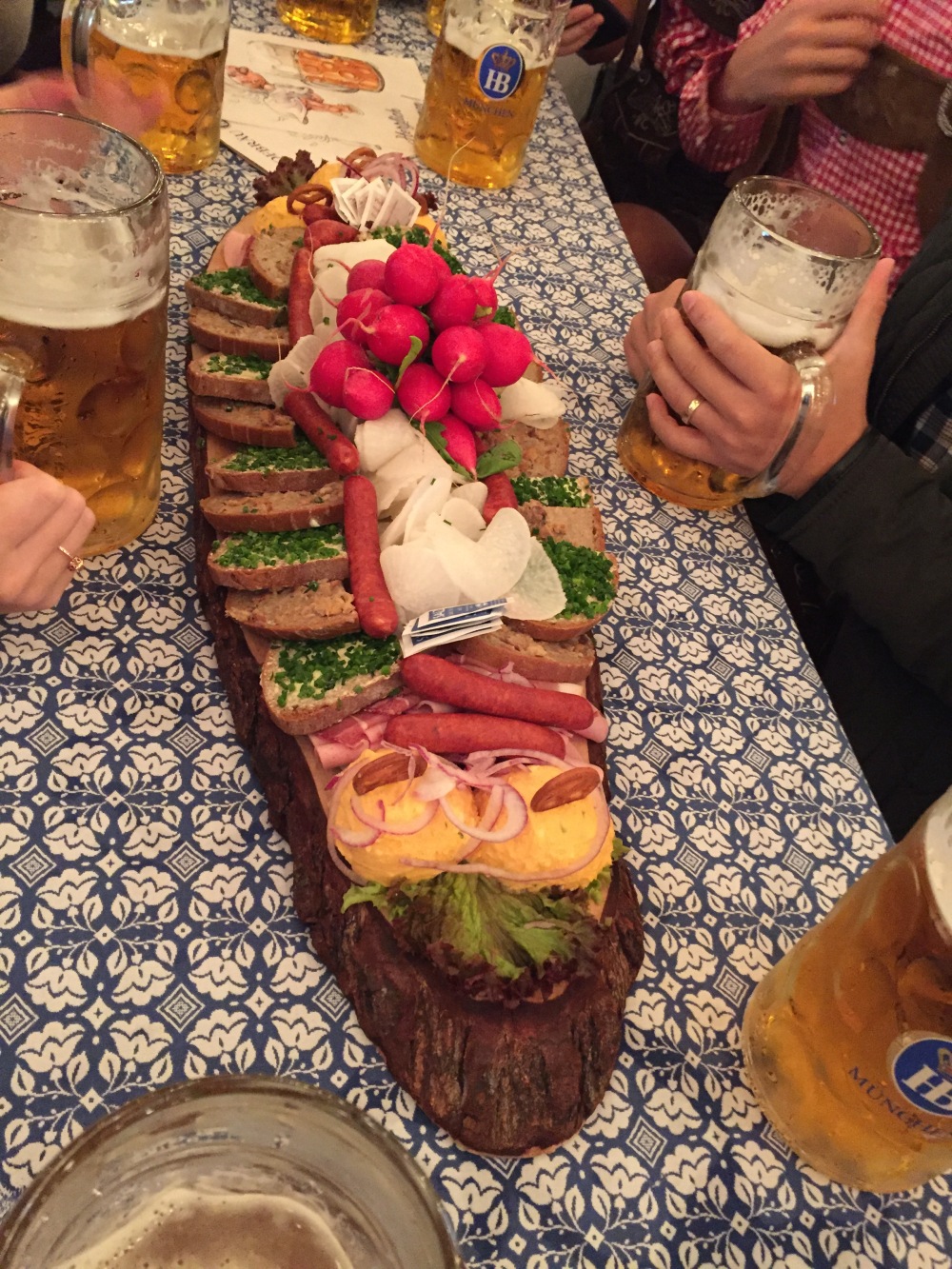 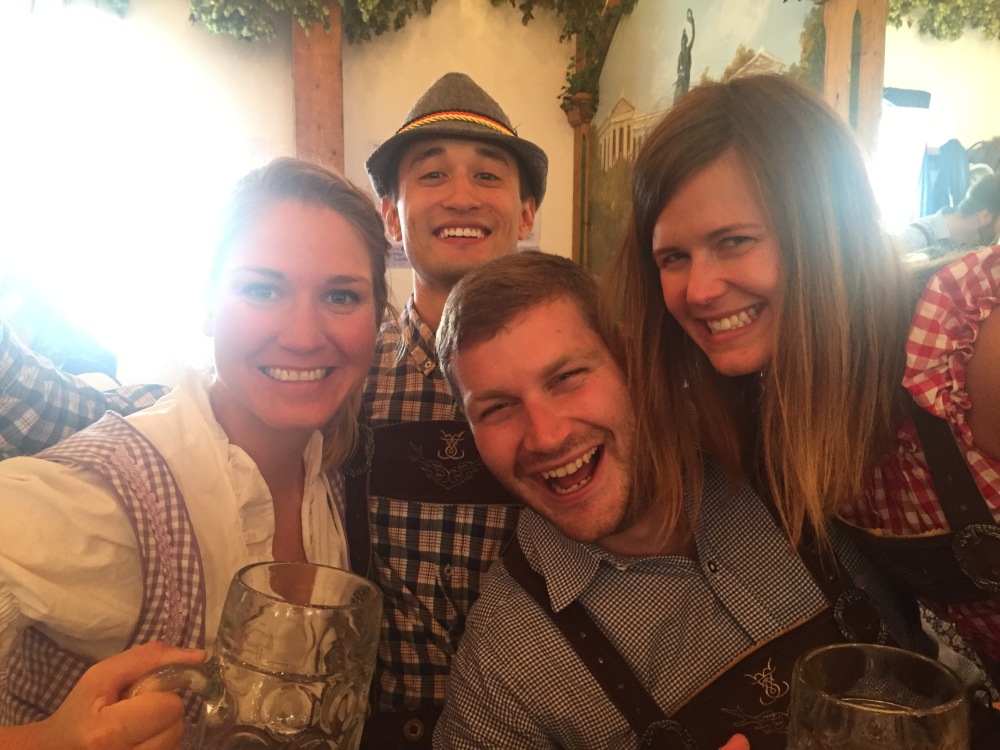 Once our reservations were over, we ended up sitting outside at a different tent for another round of beers before going to the worst sushi restaurant that had been highly recommended by a local.

To cap off our trip on the last day, Tyler and I did a walking tour through Munich. The city is full of history and it was entertaining to learn everything about the historic landmarks and the kings that had ruled there. I also enjoy learning about WWII and liked the fun fact that one of the sites that was said to have started the war was turned into a toy museum because the Germans chose to not commemorate the war. 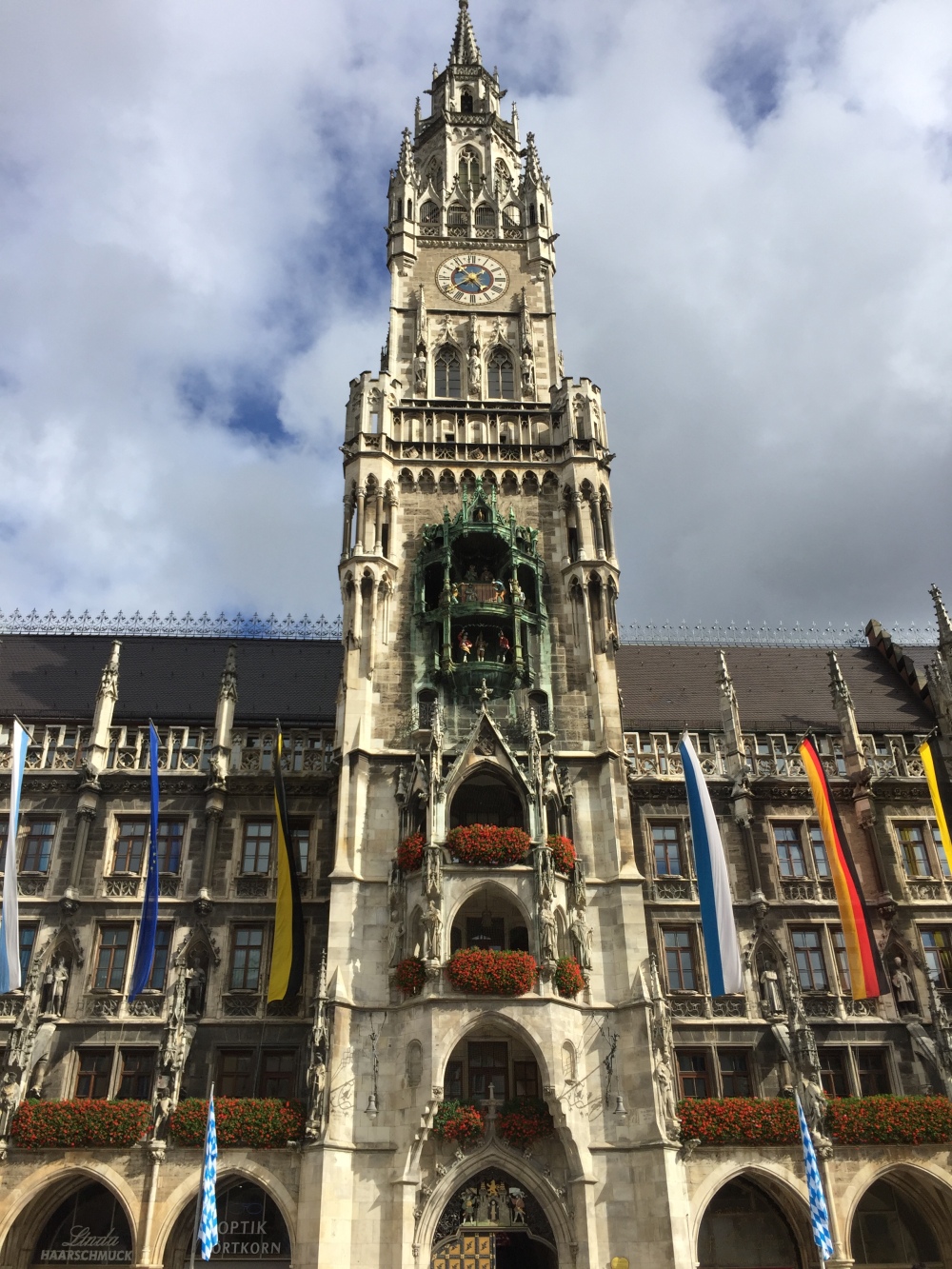 I am definitely going to Oktoberfest again in 2018, who’s with me?! 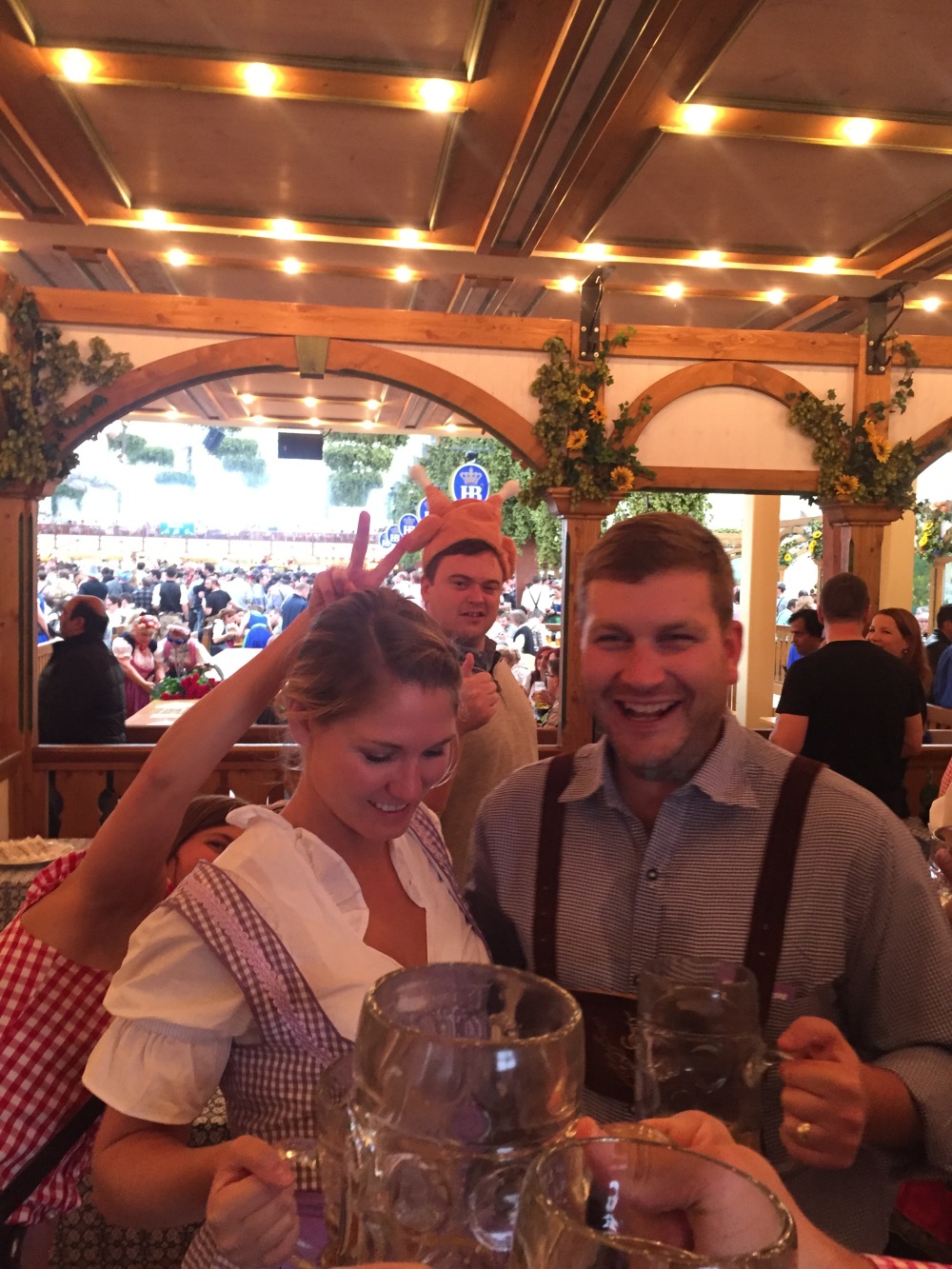