Last year we had such a good time dressing up in our finest lederhosen and dirndls, that we decided to do it again this year! Although we weren’t on the ball about booking hotels 10 months in advance this time, we still ended up getting lodging close to the Theresienwiese park (where the magic happens). I actually liked the location of our hotel, the Helvetia, even better than where we stayed the previous year. Even though the hotel was more like a run down hostel, it’s main selling point was the 10 minute walk to Oktoberfest.

To maximize my Oktoberfest time while also saving vacation days for bigger trips, I flew to Munich Friday after work and flew back Monday morning in time to go to the office. This did not leave much time for sight seeing, but since we covered that last time, I wasn’t too upset.

We arrived Friday night in time to get drinks with Raney and Jami, friends from the US who were in town for the fest. Crossing another Top 50 Cocktail Bar in the World off our list, we visited Schumann’s, which had a bit of a speakeasy flair with some damn good cocktails. Our reservations were at midnight because of our late flight, so we only had time for a round or two before getting some sleep before hitting up the tents the next day.

At pretty much the last minute, a few days before our trip, Tyler scored us a table at the Schottenhamel tent from 3-10pm on Saturday through connections at work. Not only did we have a table reserved for the whole time and wristbands to enter and exit as we pleased, but the EUR 60 price included 5 liters of beer and half a chicken and an appetizer spread. It was a great deal. 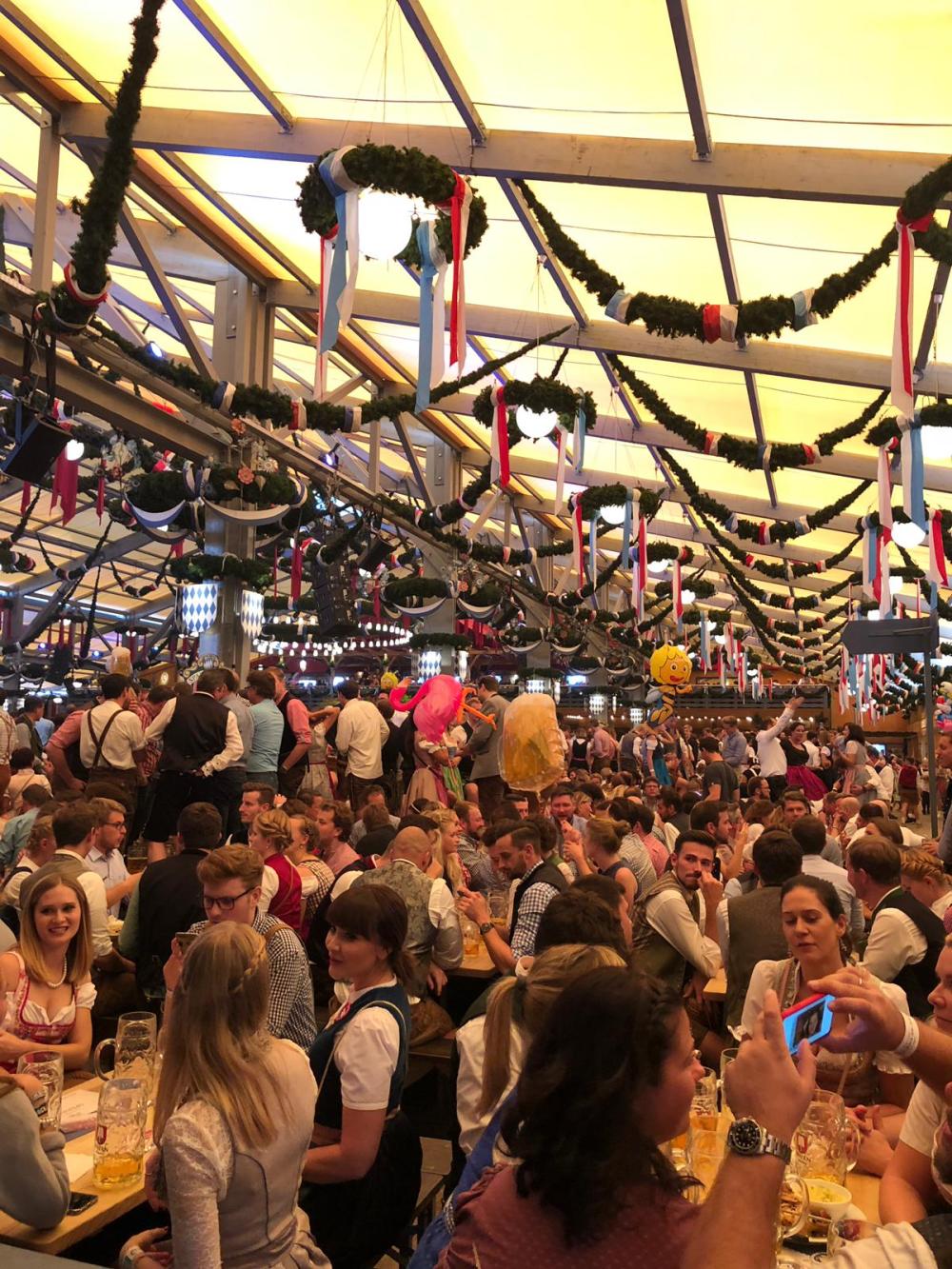 Because the reservations didn’t start until 3, we took our time getting ready in the morning and had some brunch before heading into the fairgrounds. 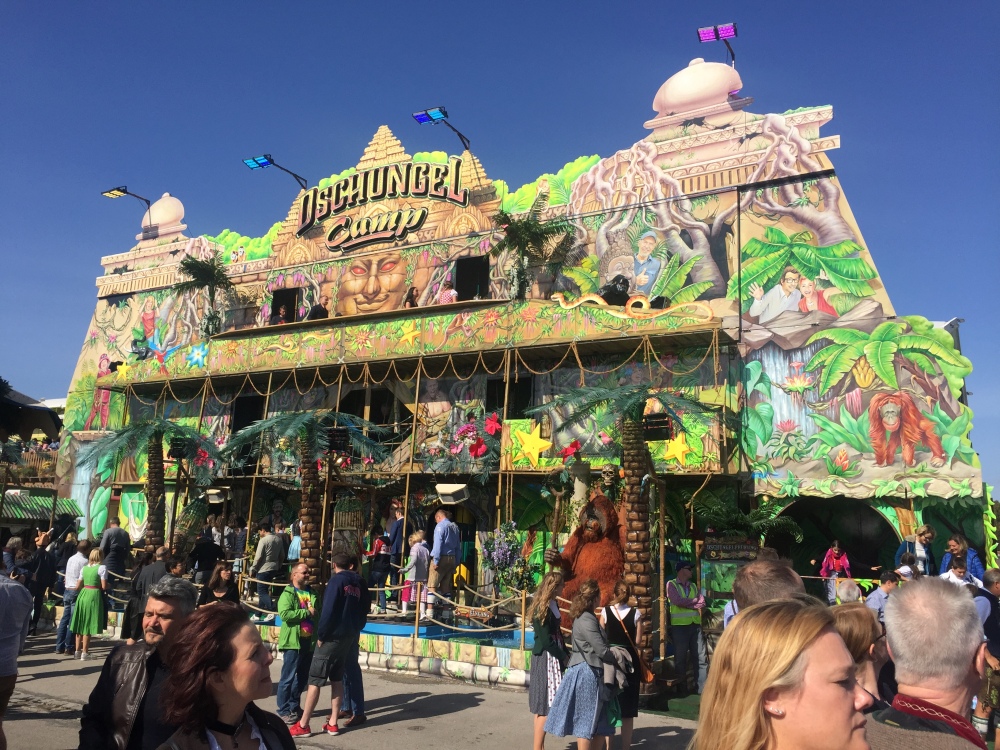 I really enjoyed walking around the fair during the day before we started drinking, because it was something that we didn’t really get to experience last time. Although it was crowded, we were able to get some street meat and ride some rides. Actually, only Noah, Shannon, and Tyler rode the ride, but I was cheering them on from afar. Shoddy fair rollercoasters after eating a big breakfast are just not my thing. 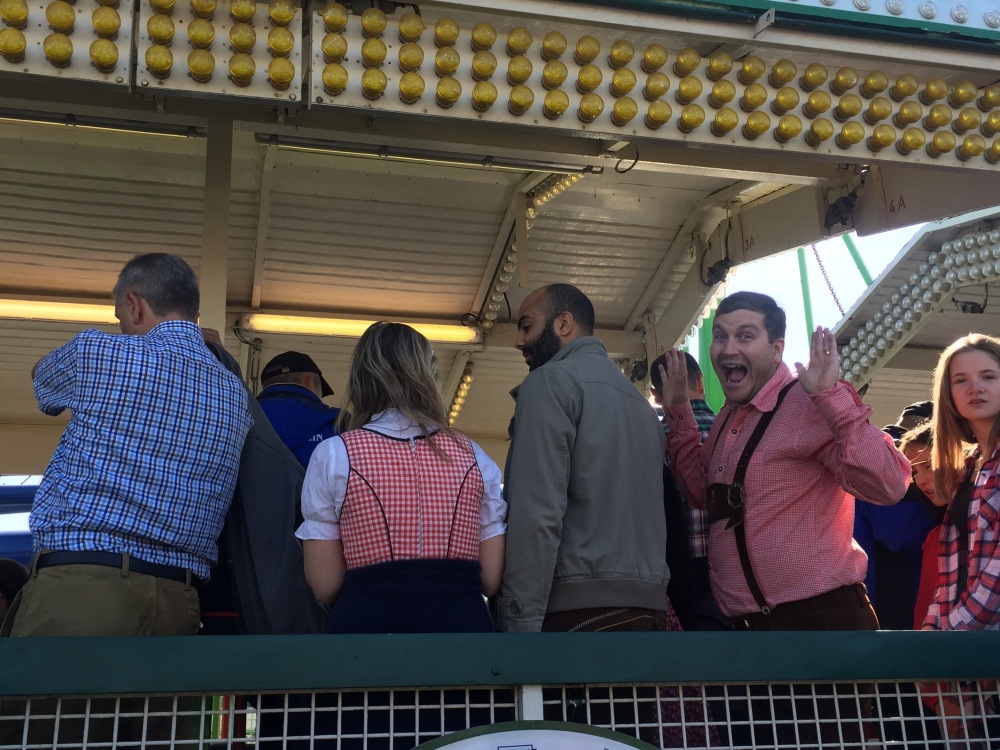 After the rides, it was time to go to the tent. There was a secret entrance in the back for people who had reservations so we walked around and saw a mob of people all trying to force their way into the tent and several bouncers trying to keep them back. Our friends were already in line so we joined them and handed out the wristbands. Once we put them on, we went straight to the front of the line and through the door, feeling like celebrities.

Our table was on the second floor, where things were still a bit more respectful than the chaos below, which was nice because we could actually hear each other talk. We had a pretty big group taking up two full tables and proceeded to get our first liter.

One of the guys who had a 24 hour travel time to Munich after missing his bus from Amsterdam (and then having to take a series of different trains and buses throughout the night and next day) gulped down his liter within 2 minutes. Impressive.

We spent the next few hours chatting and throwing radishes from the appetizer in each others drinks, because who actually is going to eat a whole radish? 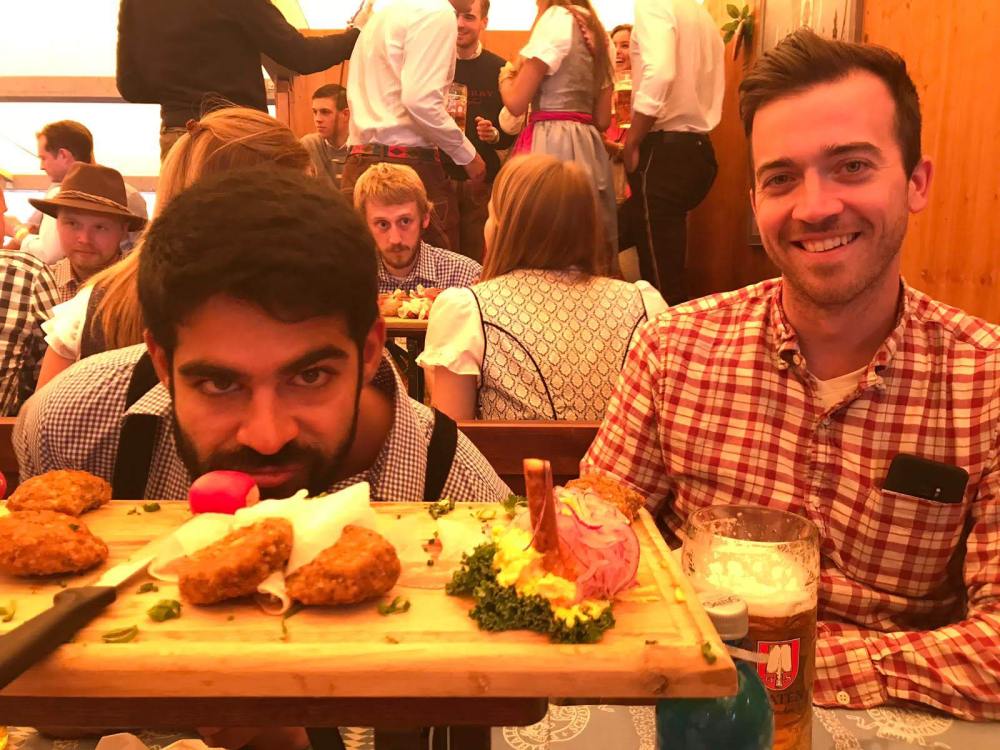 Tyler had a hat that he had saved from the previous year that kind of looked like a wizards hat. We all took turns wearing it and doing the Pottermore Harry Potter house quiz to see where we would be sorted. It was a hilarious experience, until someone lost the sorting hat.

Throughout the day, more and more people from our group showed up, until we were finally complete. We ate, drank, and were marry while making each other laugh. 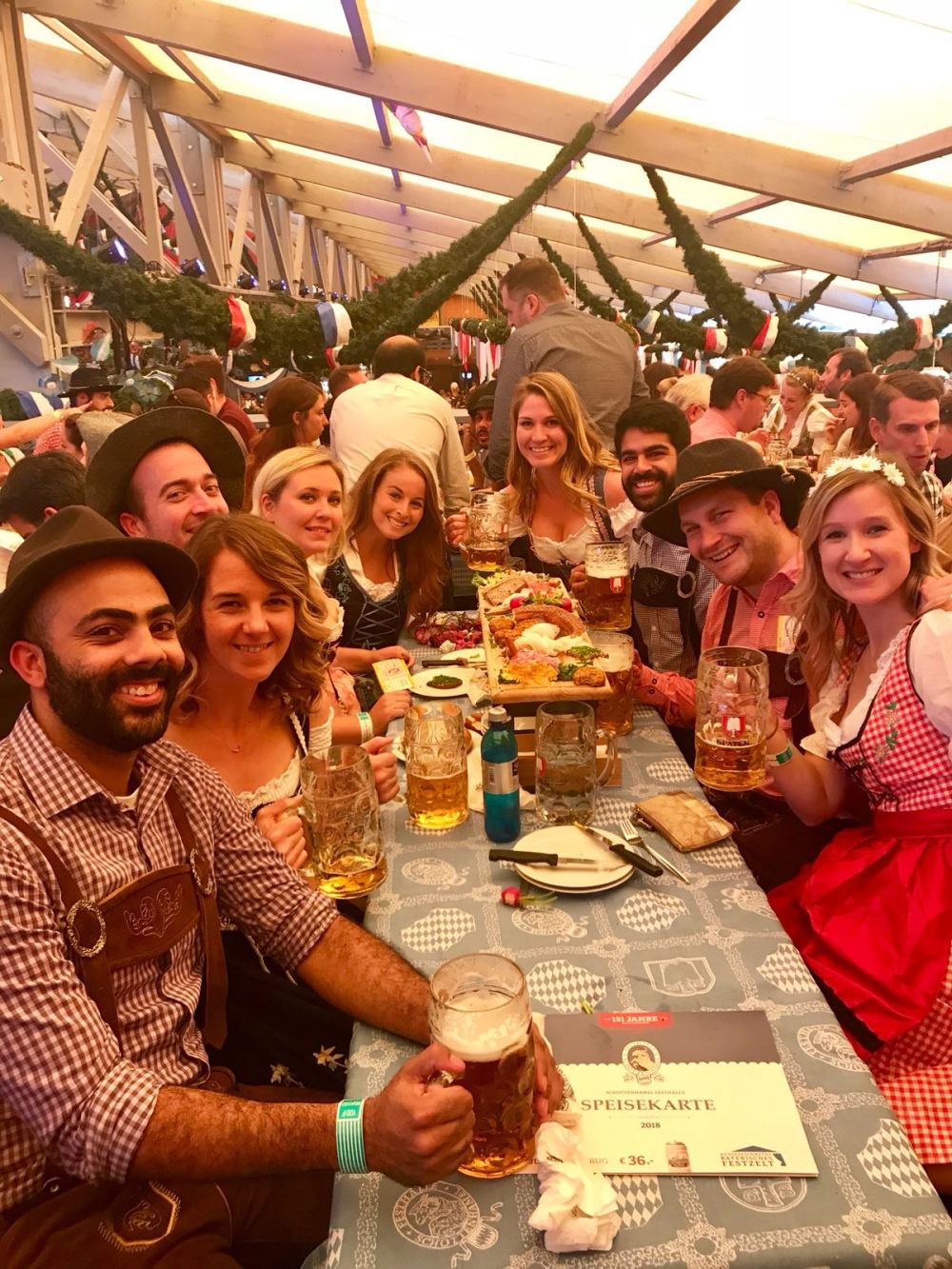 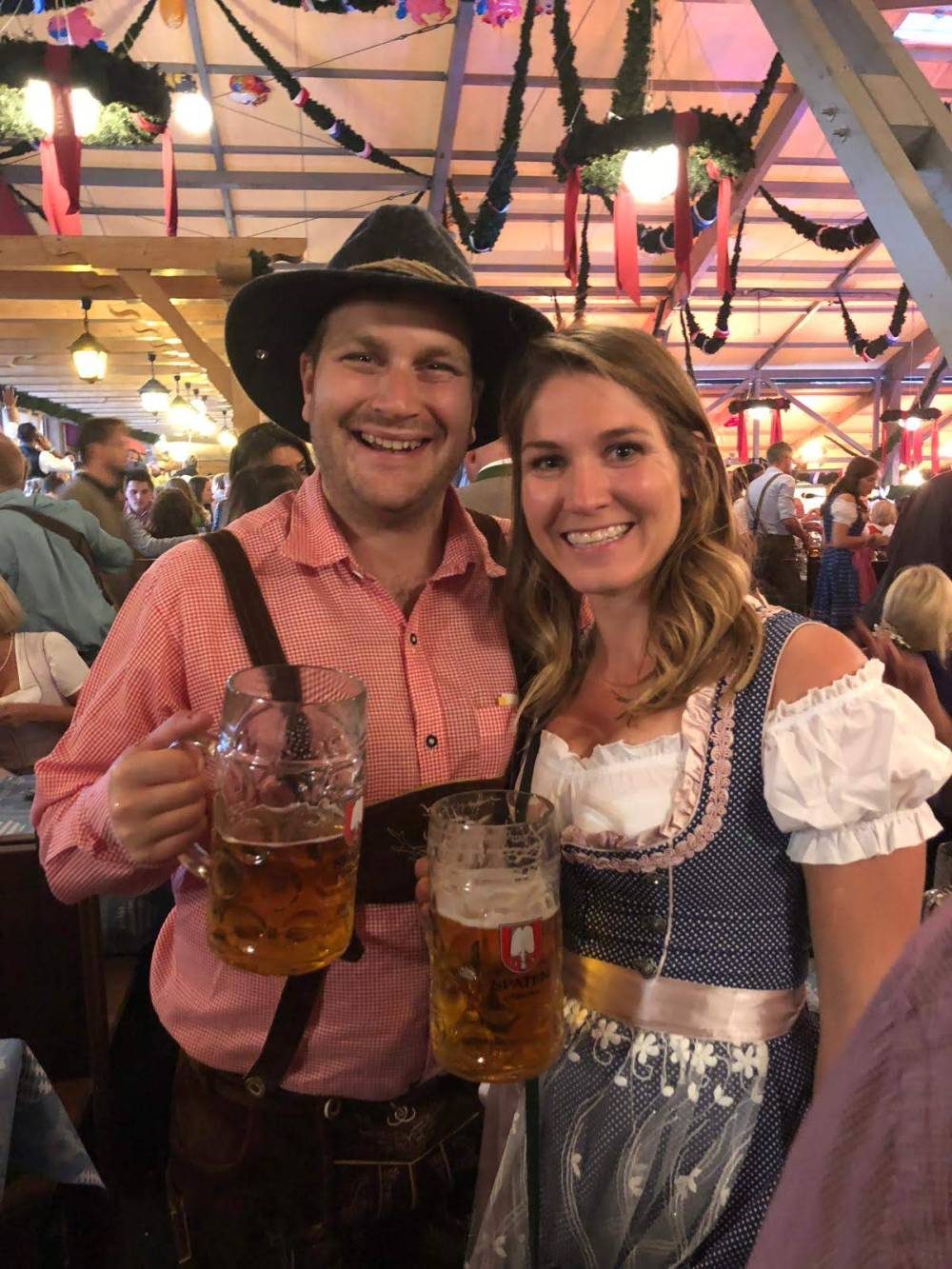 At one point, a group of us girls went down into the massive party below. In hindsight, a group of mostly married girls going down into a gauntlet of really drunk guys was not the best idea, and after being grabbed and shoved a few times, we went back to our table.

I don’t think I made it through my allotted 5 liters of beer, which was probably for the best because by the end of the night most people had been overserved. Everyone made it back to their hotels ready to do round 2 the next day.

On Sunday, we had reservations at the Hofbrau Haus tent from 12-5. Everyone was definitely moving slowly the next morning and Tyler and I were the only ones who made it to the tent on time. After picking up our vouchers, we headed to our spot and were greeted by the other patrons in our area. We had a great view of everything happening in the middle of the tent. 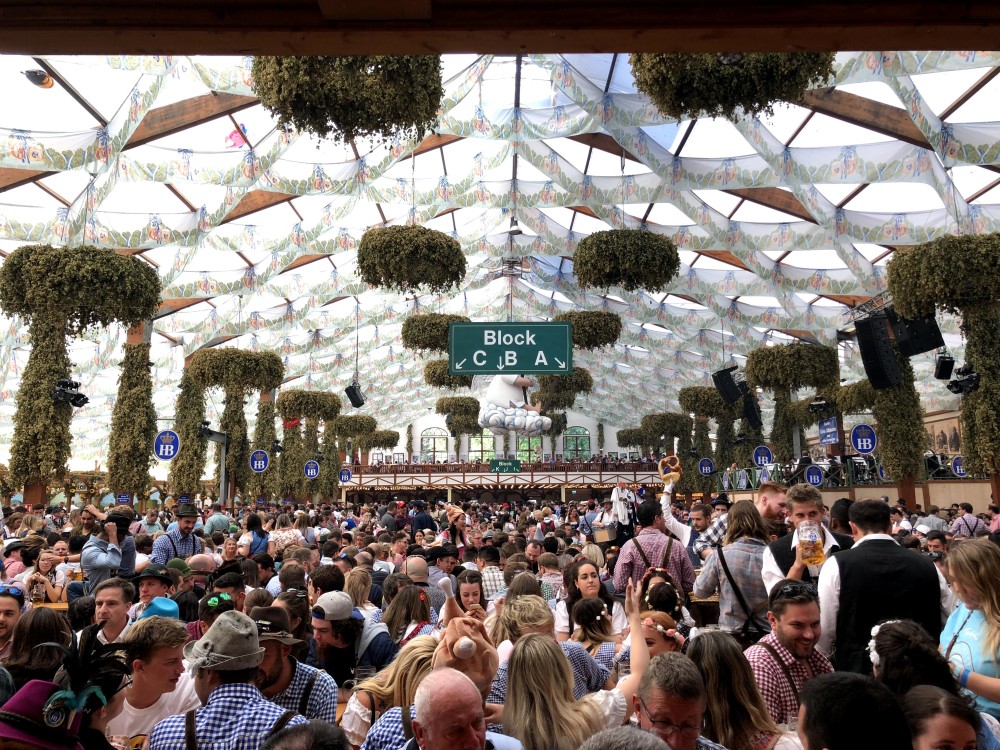 Throughout the day, the band would play the same set of about 10 songs on rotation and even if you didn’t know a lick of German, it was easy to make up your own words and sing along. An older lady sitting at the table next to us took a liking to our group and tried to teach us the song.

She also gave Jami her cookie which was nice.

We even saw an old friend that Tyler had made at the last Oktoberfest again!

It’s amazing how much fun dressing up and drinking liters of beer with your 10,000 new favorite people can be, but I’ll let the pictures speak for themselves. 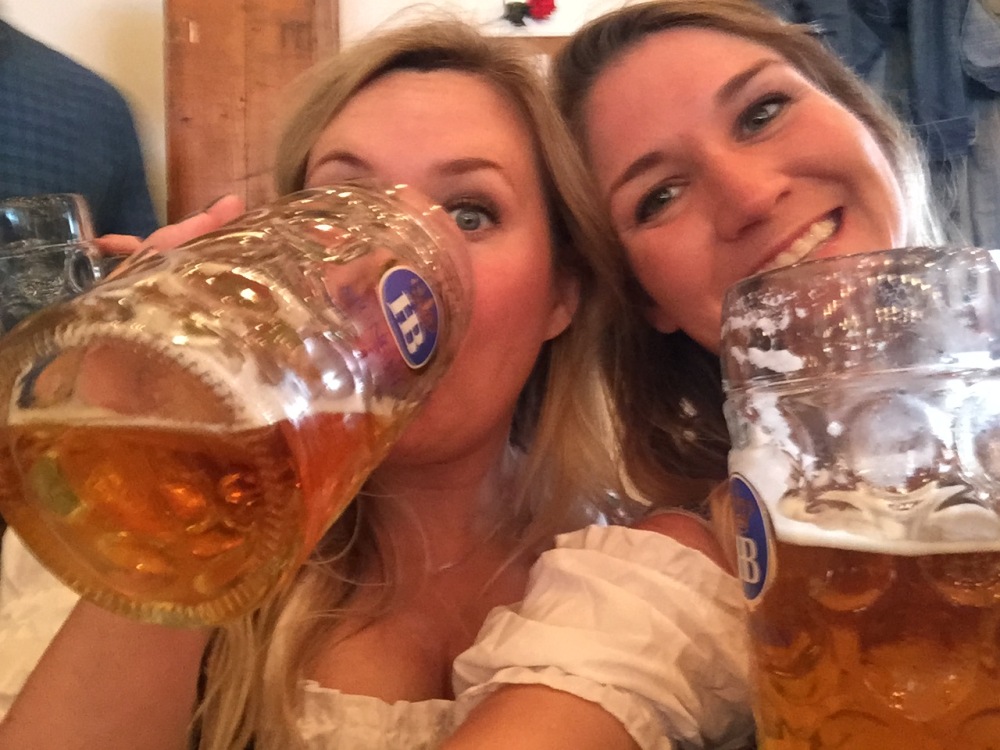 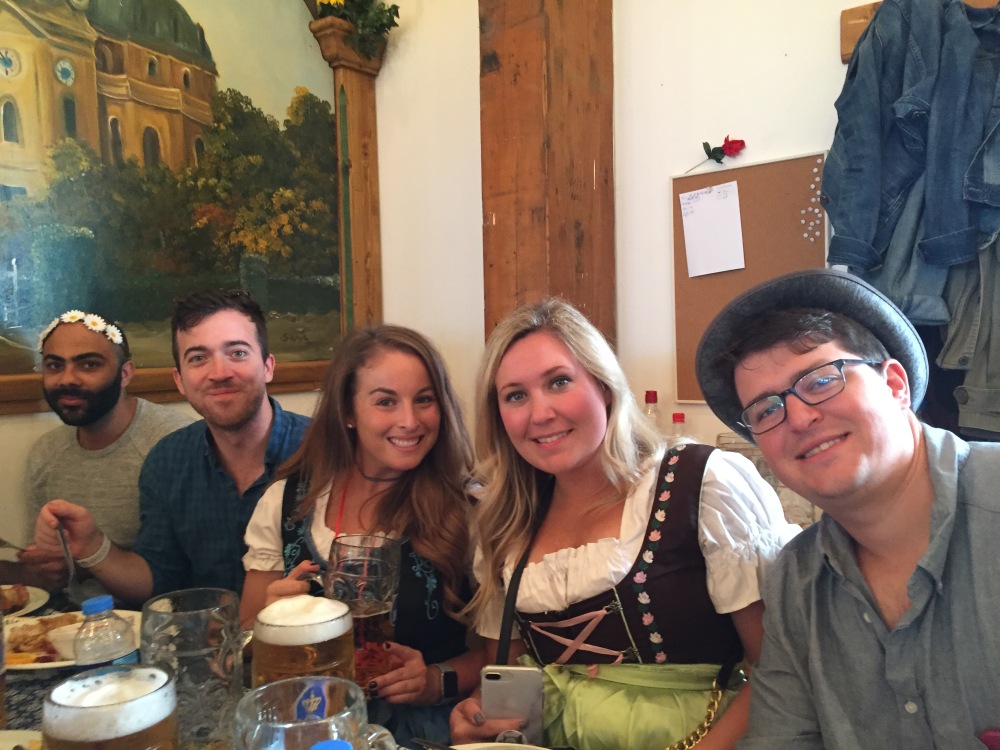 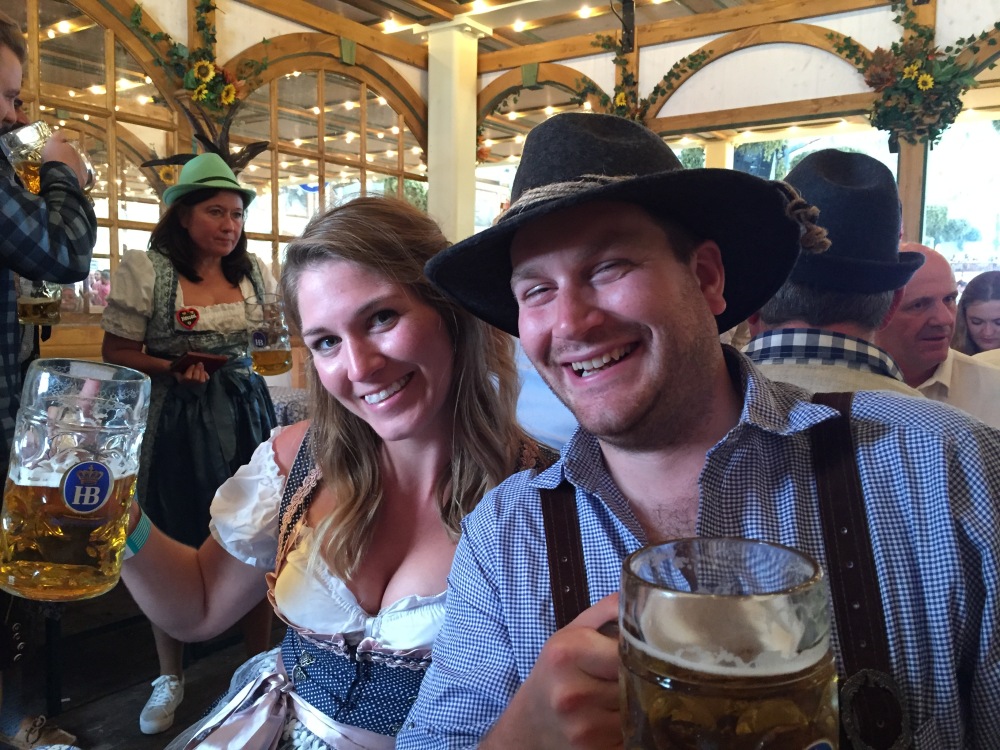 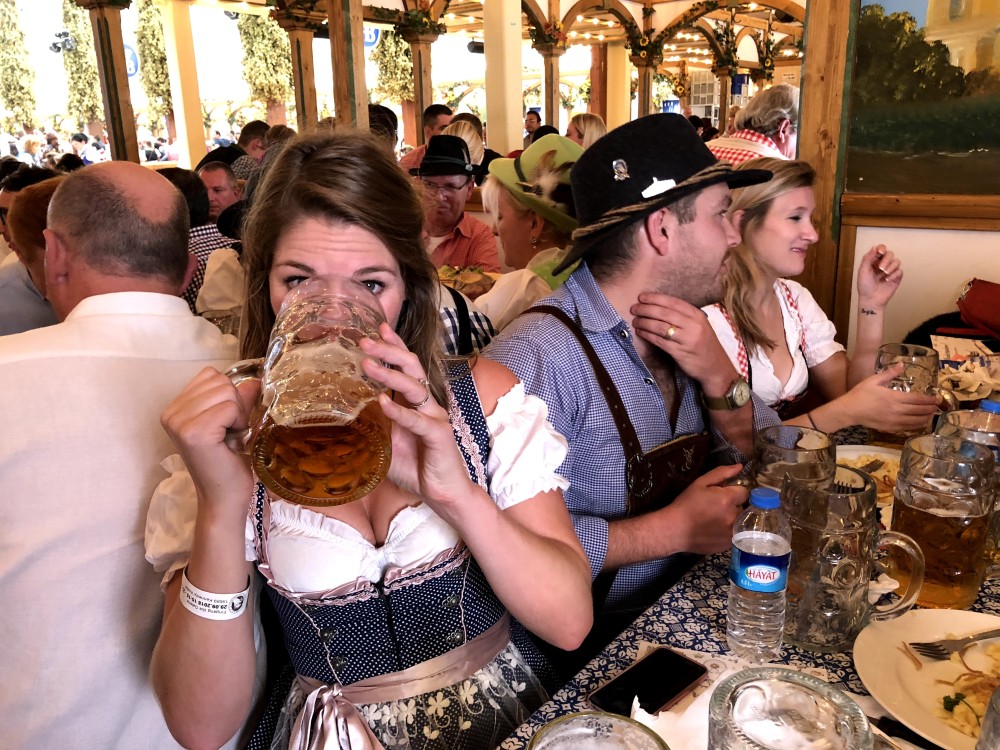 I’m ashamed to say I did not make it out after the tent on Sunday and went back to the hotel to get some sleep before the early morning flight. I have since heard that I missed out on some bumper cars and fireball shots, but I did make my flight, so maybe it’s for the best.