Stockholm has been on my travel bucket list for a while. The Nordic countries have always fascinated me with their commitment to minimalism and cleanliness. Everyone seems happy and balanced, especially during the summer when it’s light outside for 18ish hours. Not to mention, the landscape and natural beauty is incomparable. 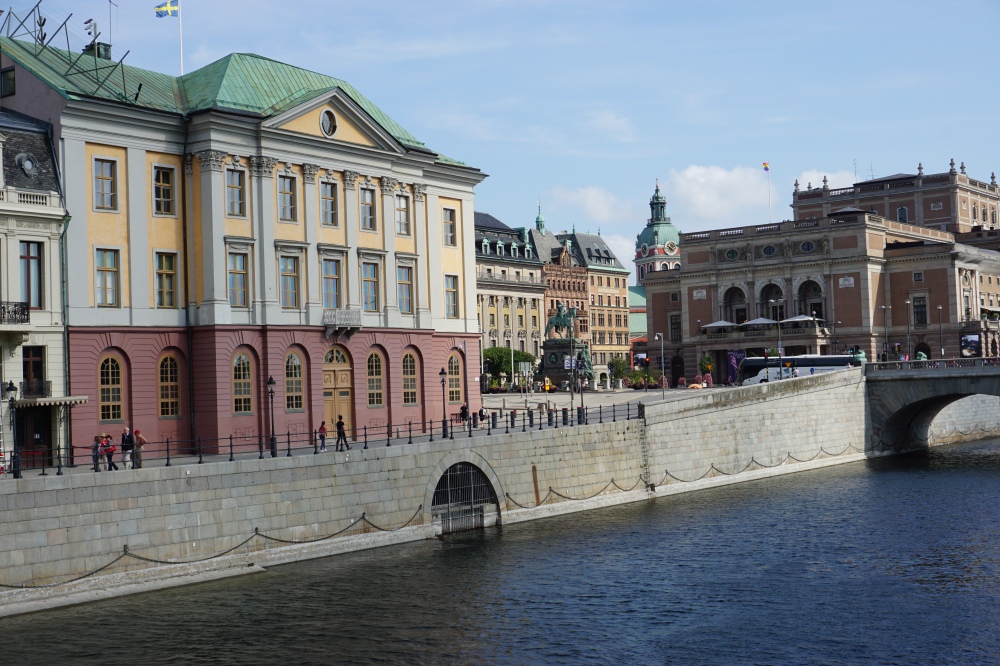 As with most places in Europe, Stockholm was just a short 1 hour 45 minute flight from Amsterdam. Upon our descent I noticed immediately two things: so many trees and so many islands. Apparently Stockholm has one of the highest numbers of islands that are connected by bridges. 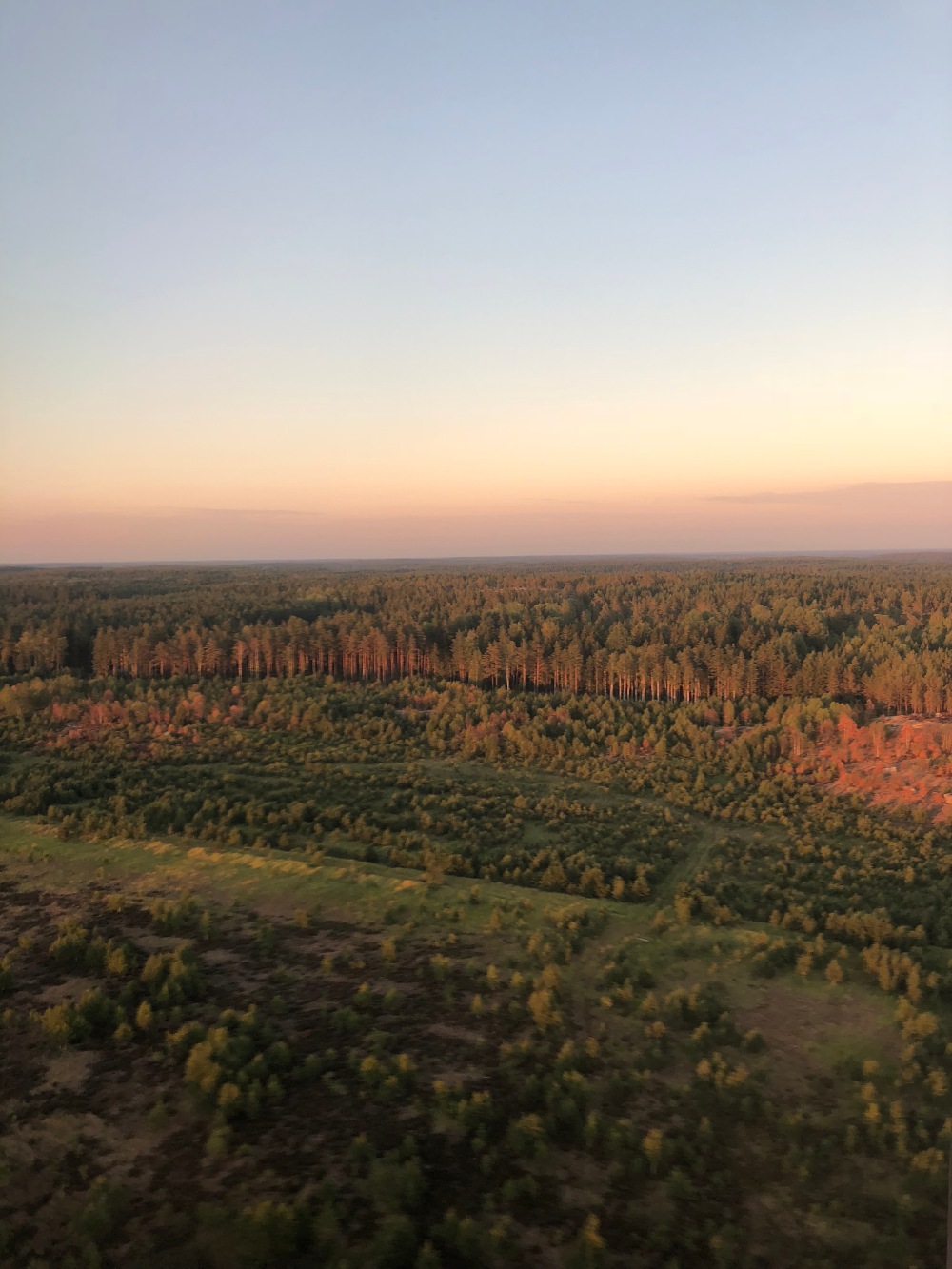 For our short weekend stay, we picked the Hobo hotel, centrally located in the Norrmalm neighborhood, and just a walk away from most of the places we had on our visit list. The hotel had a trendy hostel vibe, but with a more grown up twist, except for the water guns that were a staple in each room (and were definitely put to use). Because we took an earlier flight than normal, we arrived in the city in time to actually make it out on Friday.

Per usual, Tyler put in a lot of research for restaurants and bars that we had to try. The highlight of Friday night was definitely the Pharmarium. This posh craft cocktail bar boasted a menu full of interesting, but delectable combinations. The fan favorite from our crew was a peanut butter ice cream whiskey cocktail, with rainbow sprinkles.

The runner up was a funky gin number with lavender licorice gummy pearls. Drinking in Stockholm can get pretty expensive, so once our friends Shannon and Noah arrived at the Hobo hotel, we went back to meet them and call it a night. After all, we had to get up early for our standard 10am walking tour.

For the free walking tour of Stockholm, we chose to do the Old Town route. Our Croatian tour guide provided a good mix of interesting history and humor. He also warned us of the pickpockets or “meatballs” and would alert us whenever one was in the vicinity. We got a kick out of trying to spot the meatballs and probably falsely identified a few.

Some of the highlights of the tour were:

Gamla Stan, an area of the Old Town with beautiful, vibrant buildings. It is also really old.

The tower of the white widow. Long story short, this guy built a tower with a bell for his wife after she died. He hastily remarried and the dead wife haunted him and his new bride by ringing the bell every 15 minutes.

Alley of Marten Trotzig, only 90 cm wide and apparently only the Dutchies can walk from end to end while touching the sides with their arms spread wide.

Little boy who looks at the moon, a tiny statue of this little boy that you can rub for good luck if you want to get pregnant. People put little clothes on the little statute and also donate their foreign [worthless] coins. 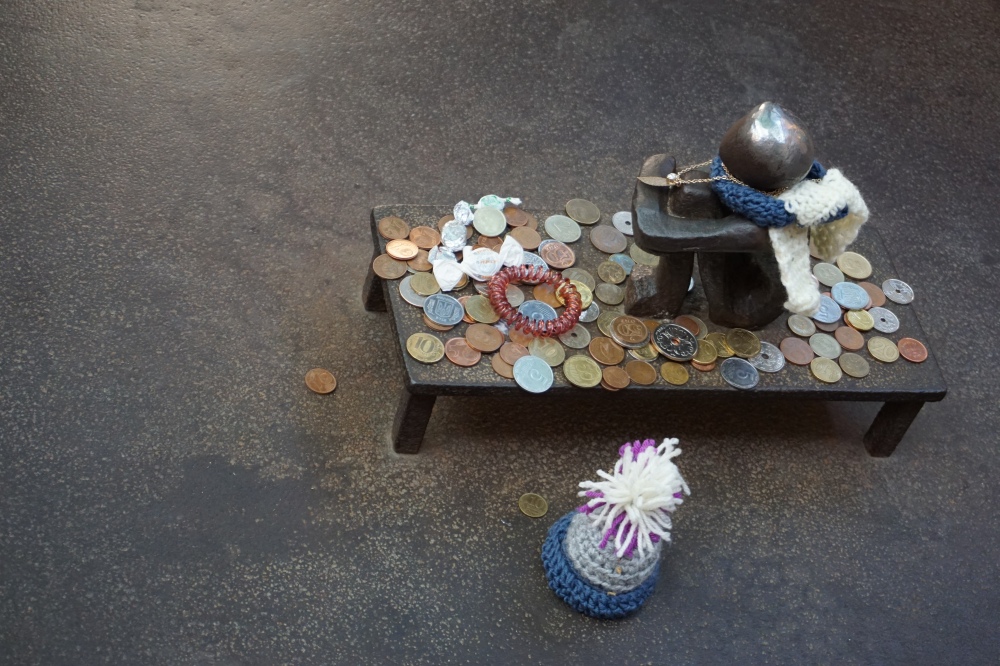 The Nobel Museum, Stockholm is home to the big banquet for the Nobel Peace Prize. 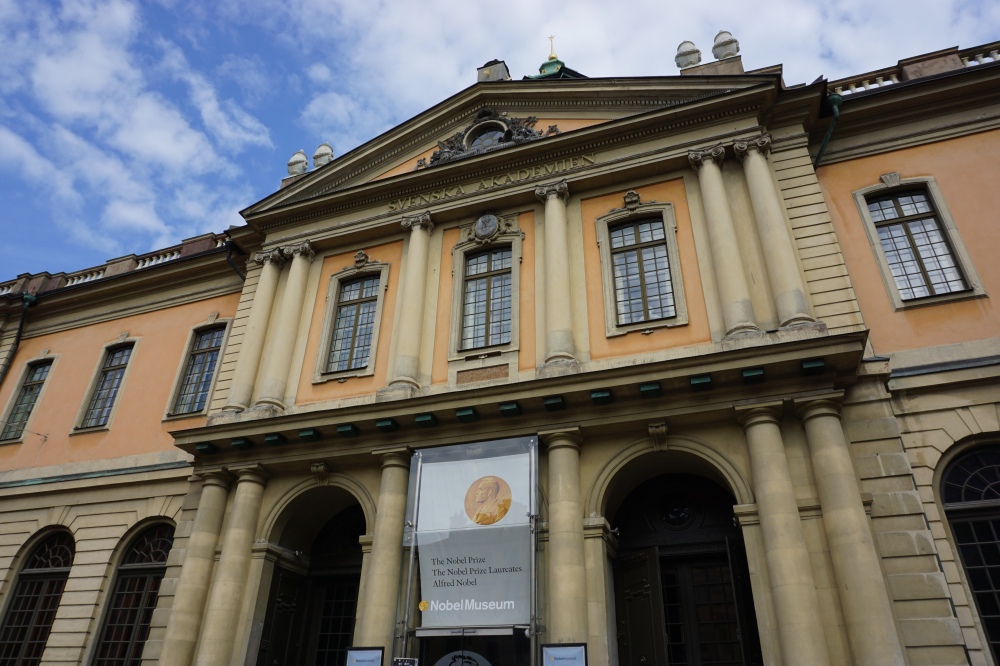 The Royal Palace, where we also happened to witness part of the changing of the guards. Although the marching band did play some fun songs, it was kind of hard to see what was going on and I have seen the changing a few times in other locations, so I was not super impressed.

And then we learned about a few Swedish words that we all know today. Window is Swedish for an eye for the wind to pass. The days of the week are named after the gods in Swedish. Husband = House + bundy = the master of the House (not so sure about this one ;).

Lastly, our Croatian tour guide wanted to assure us that the Vikings weren’t bad people. They wouldn’t ever steal from anyone as stealing was a terrible crime. They would ask you for your things, and if you said no then they would kill you. Once you were dead, your stuff was up for grabs!

We also just walked by some pretty cool stuff. 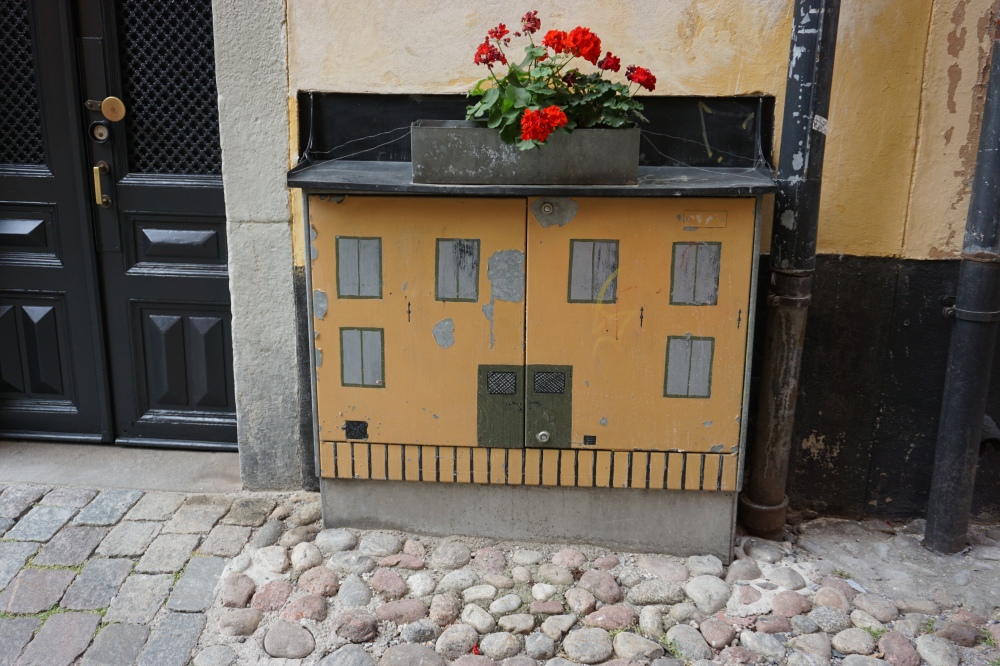 Post walking tour we were famished and needed some traditional Swedish food, so the boys of course got the Swedish Meatballs. I was assured that they are in fact better than IKEAs. 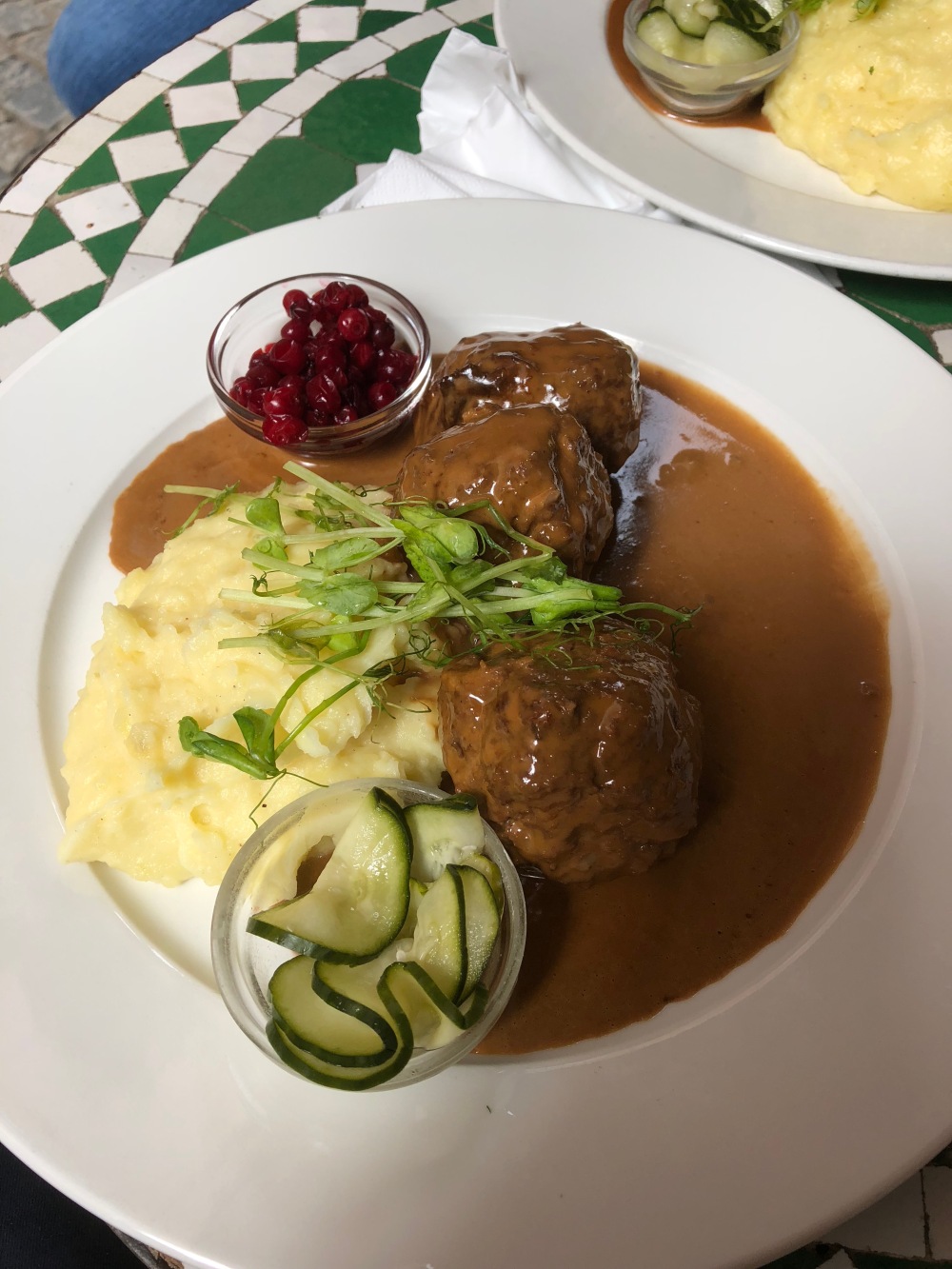 With full bellies, we took a ferry to another island to go to the Vasa Museum. On the way over we passed by a theme park and I really enjoyed watching the rides, but not enough to be tempted to abandon our plans and do the park instead. 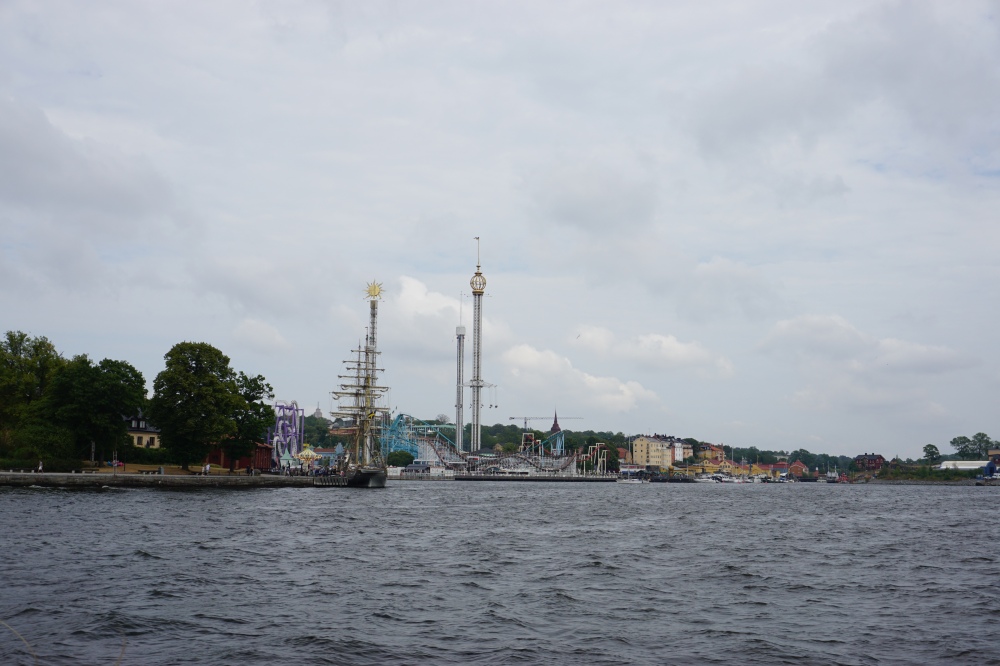 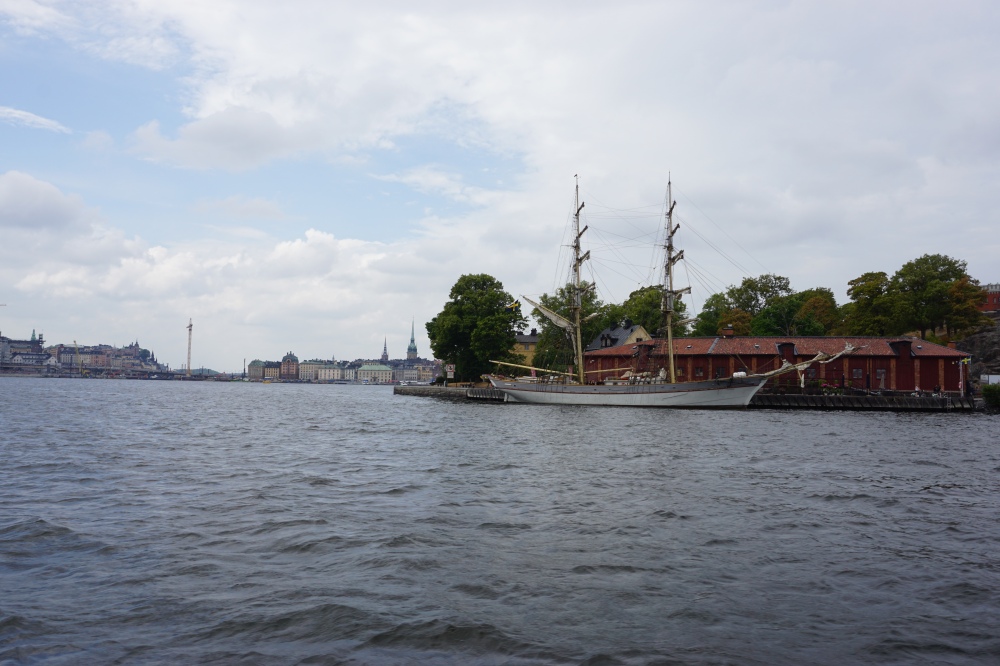 The Vasa was a warship built in the early 1600s as part of a plan to go to war with Poland. It was constructed quickly and heavily decorated to be intimidating to rivals. Because of the top heavy nature of the ship, it was pretty unstable. After only a few minutes into her maiden voyage, some winds knocked her over and she sank. The ship lay intact underneath the waters of the Stockholm harbor from 1826 to its final lift from the sea in 1961. I found the museum very fascinating and informative. The Vasa itself is massive and 98% original. Impressive. 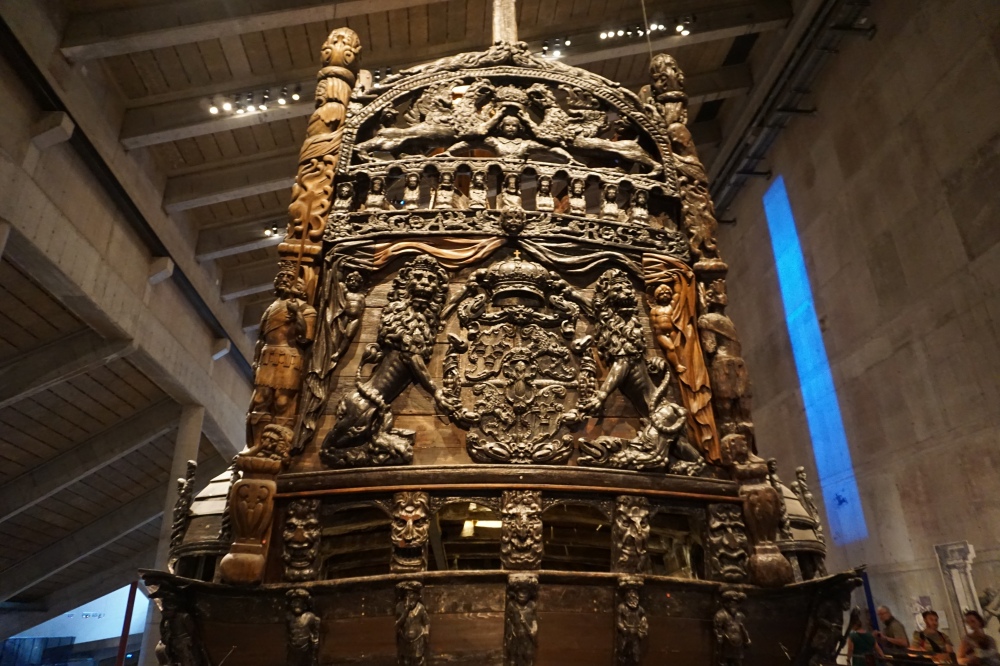 The film about the Vasa in the museum is a must see. It helped put into perspective what the people were going through as the boat sank, and also had live footage of the boat being lifted from the sea in the 60s. 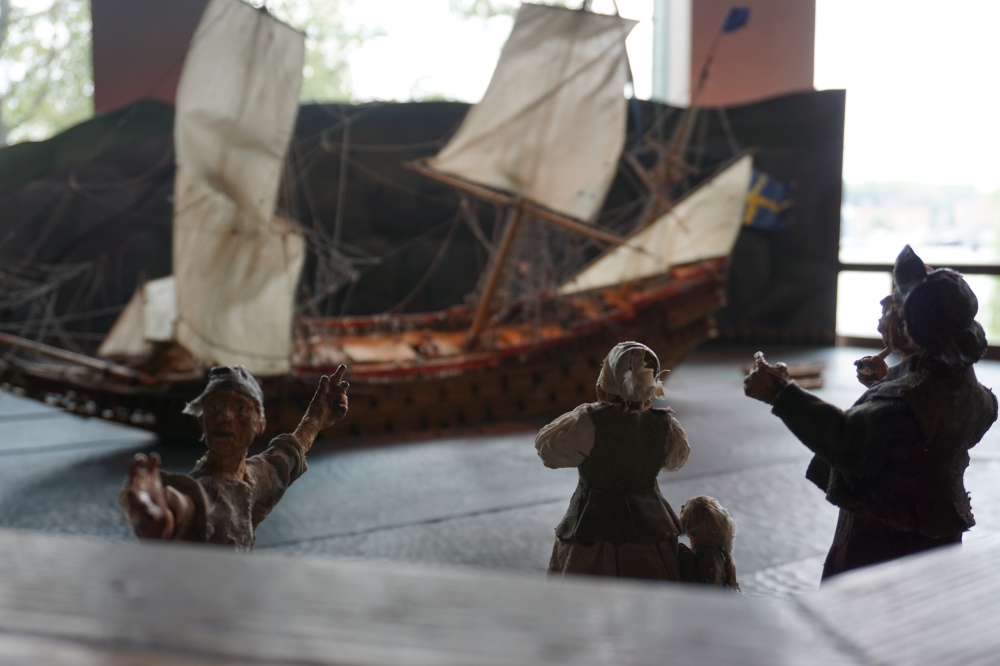 I really enjoyed this museum and would be keen to start going to others while we travel. Nonetheless, having had our fill of culture, it was time to do what we do best when visiting a new city, check out the beer scene. Tyler’s research led us to Omnipollos Hatt, a microbrewery with a flair for mixing unusual combinations. It was here that I had my first ice cream beer, raspberry flavored. Apparently this is a new thing and they add lactose to the beer to give it a bit of a creamy flavor. I was definitely a fan. In addition to the raspberry ice cream beer, we also tried a sour cherry Gose, blueberry ice cream beer, mosaic IPA, and a stout.

Coffee and cinnamon rolls are a Swedish tradition that we also did not want to miss, so we partook in a mid-afternoon pick me up before going to the hotel to get ready for dinner.

While we sat and drank our coffee, we were serenaded with some jazz. 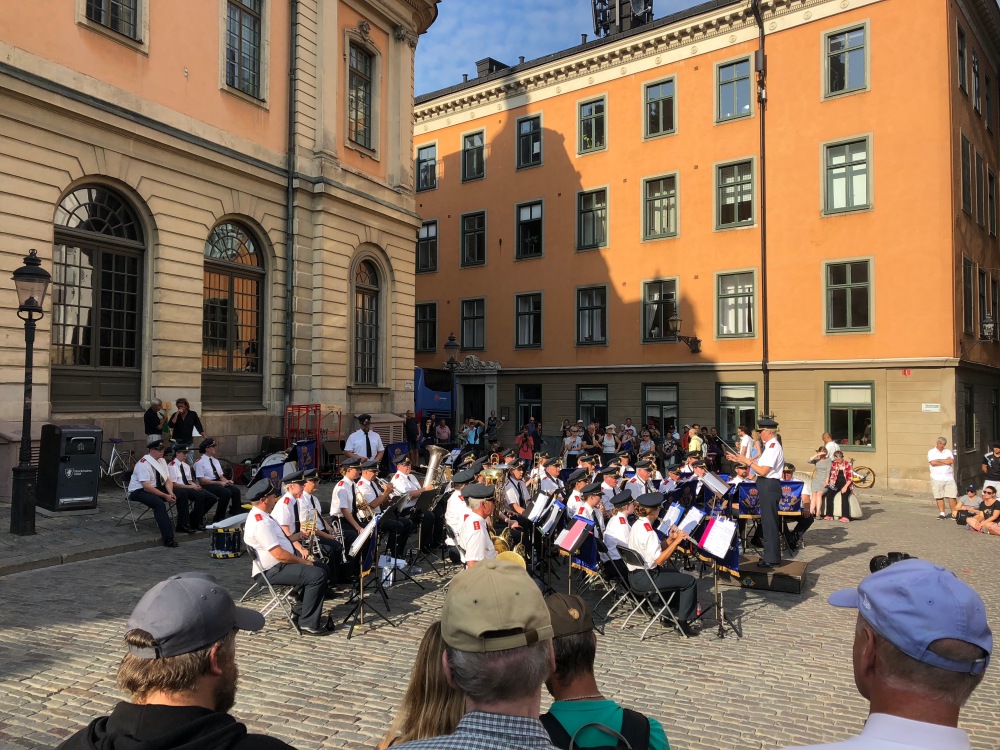 Our hotel was right next to this amazing group of rooftop bars, with the most notable one called TAK. We didn’t get to hang out here for very long because we had dinner reservations, but this was probably one of the coolest places I have ever been to. If you are in Stockholm please go here and FaceTime me so that I can relive this glorious place through you. 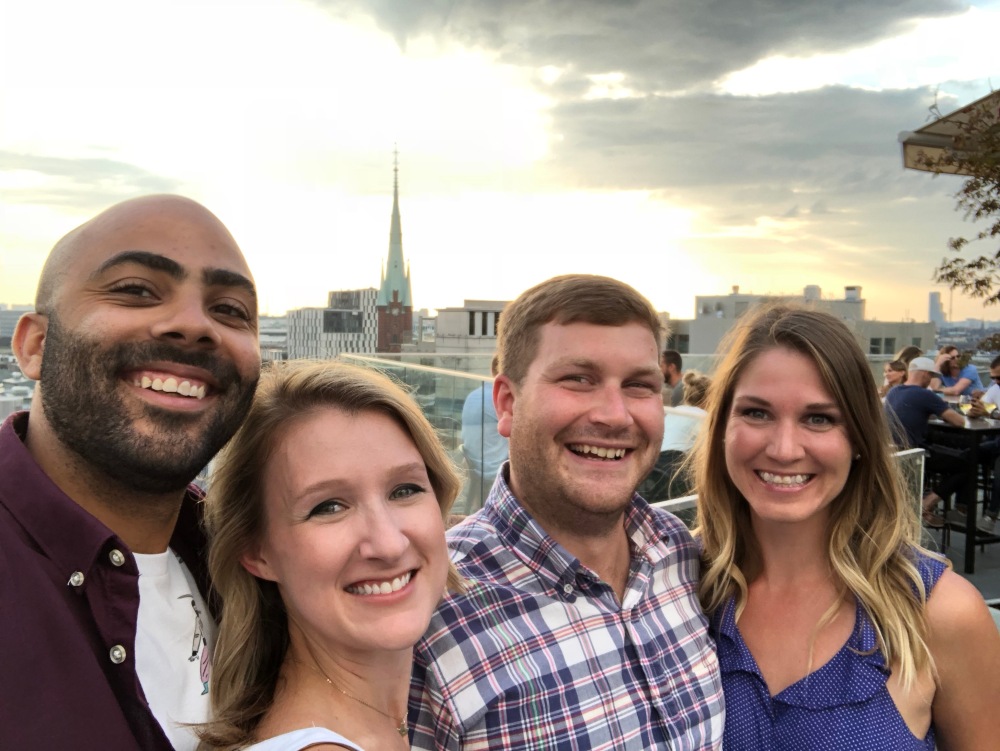 When we were in Oslo, we kind of accidentally went to a bar that was on the Top 50 Bars List (See list here). Ever since then, we periodically check the list to see if anywhere we are traveling to has a bar on the list. Stockholm was one of the lucky places, and we were able to get dinner reservations at Linje Tio. While the cocktails were pretty unbeatable and the food was super delicious, I do not really think it deserved a spot on the list. But you never know until you try! 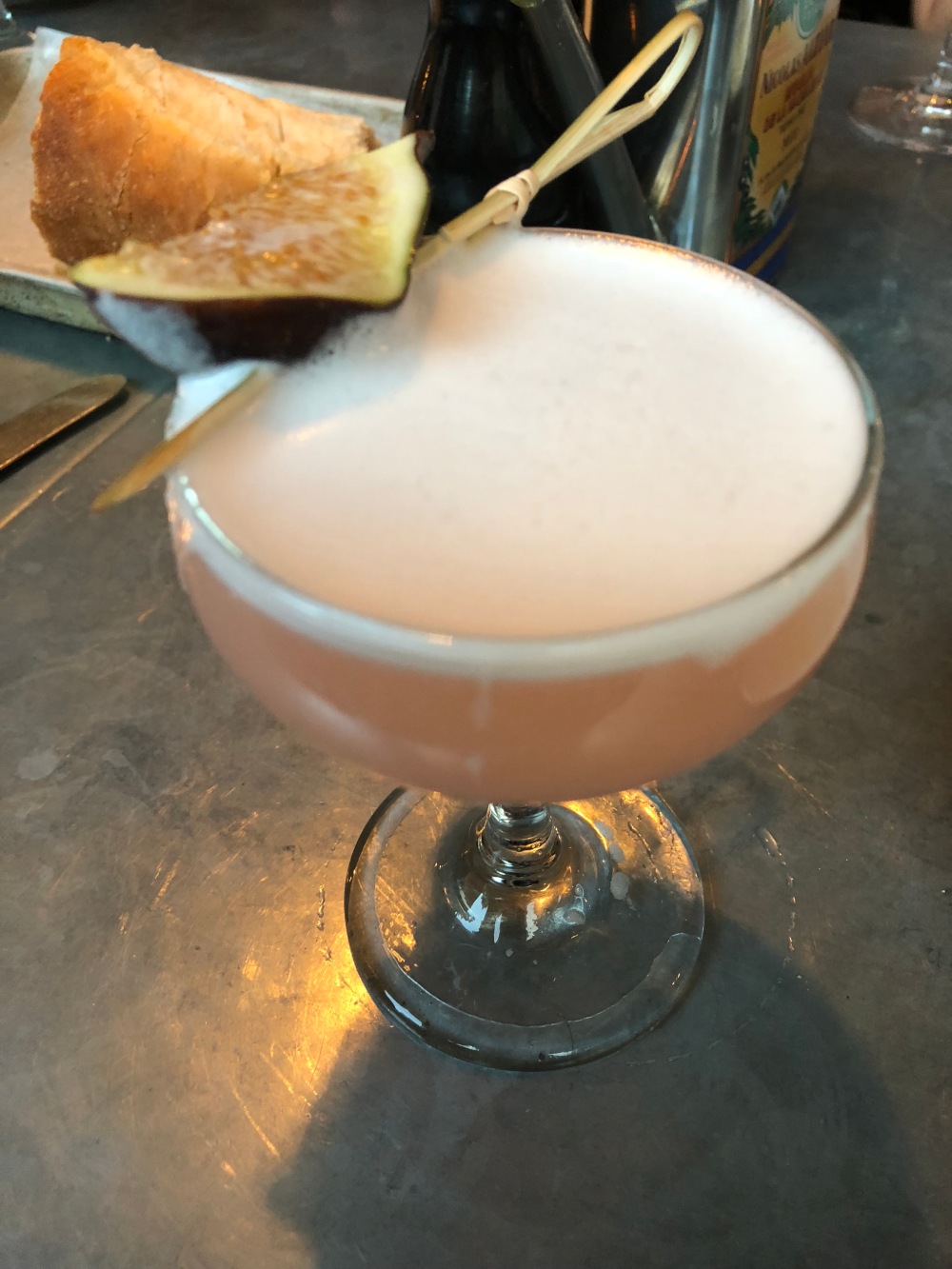 I would, however, recommend going to Bar Hommage, the cocktail bar we stopped at afterwards. It had a hip, local vibe and the bar tenders and patrons were really friendly. It felt like the kind of place I would like to hang out on the weekends at home.

To end our night, we went to the club. This club was massive and unlike any place I had ever been to. I was skeptical when we had to wait in a long line for about 45 minutes and figured the place would be sort of like a Honky Tonk Central. But I was wrong. This place had everything. There were food trucks, there was a bar with jellyfish hanging from the ceiling, there was a legit club with a DJ, there was a ping pong table, there was a huge wall you could play Mario Kart on, there was a house you could party in. 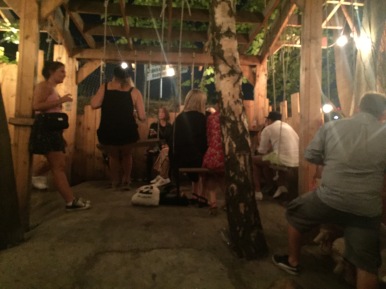 Basically, they just took the best parts out of ordinary bars and packaged it all into one. We had a great time pretending like we were the only ones in this dining room of the house party and then went outside to hit up the video games and ping pong. 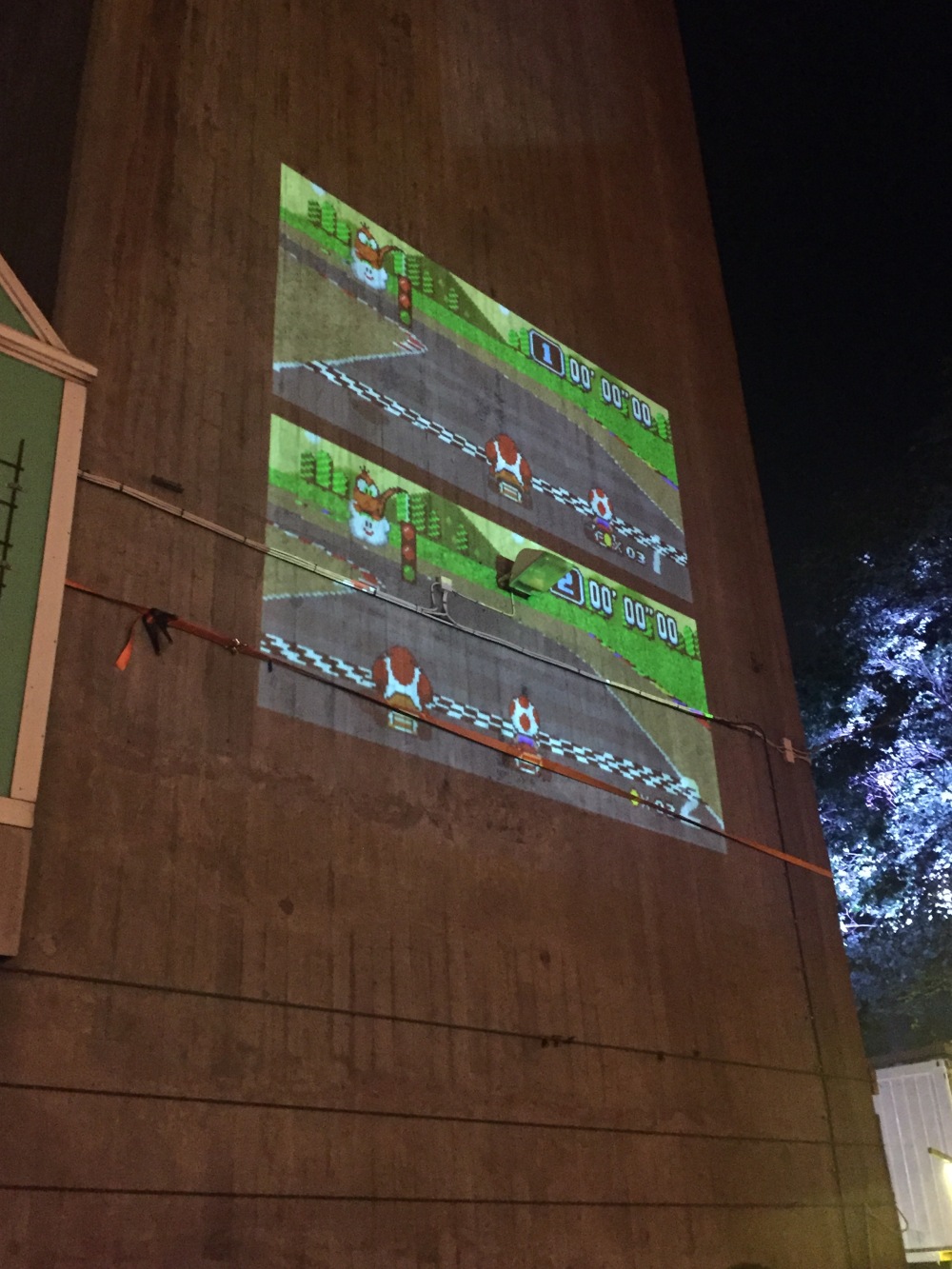 Sunday morning started off with a search for some delicious brunch. Even though there were two vegetarians in the group, the boys were insistent on going to this burger place called Flippin’ Burgers, where Tyler had the best burger of his life. He claims he will be talking about it for the next 10 years, and the veggie burger and rootbeer float I had were delicious, so it was a win-win.

Our last day in Stockholm was really hot so we didn’t spend much time walking around and headed to the airport shortly after brunch. I wish we would have spent more time in this magical city, I felt like there was so much more to see!