A few weekends ago, I made it back to the first city I ever visited in Europe, the wonderful Rome. As a college student, I studied abroad in Tuscany for a summer and spent a week in Rome on the front end. This trip back was just as spectacular as I remembered it, maybe even more so now that I have the context of having visited other places.

For this trip, we went with three friends who had never visited Rome before, and we had less than 48 hours in the city. I was skeptical that we would get to see everything on my list, but we did a pretty good job. So here’s my guide to you for seeing Rome in a weekend.

As you can probably tell from the pictures so far, my top priority for the trip was to visit the Colosseum. On my first jaunt to Rome, I was a poor college kid who couldn’t afford a guided tour or audio guide, so while I entered the Colosseum, I did not learn the history or understand the magnitude of how important of a place this was. This time around, we purchased skip-the-line guided tour tickets because the line to get in was long AF and we just didn’t have time for that. 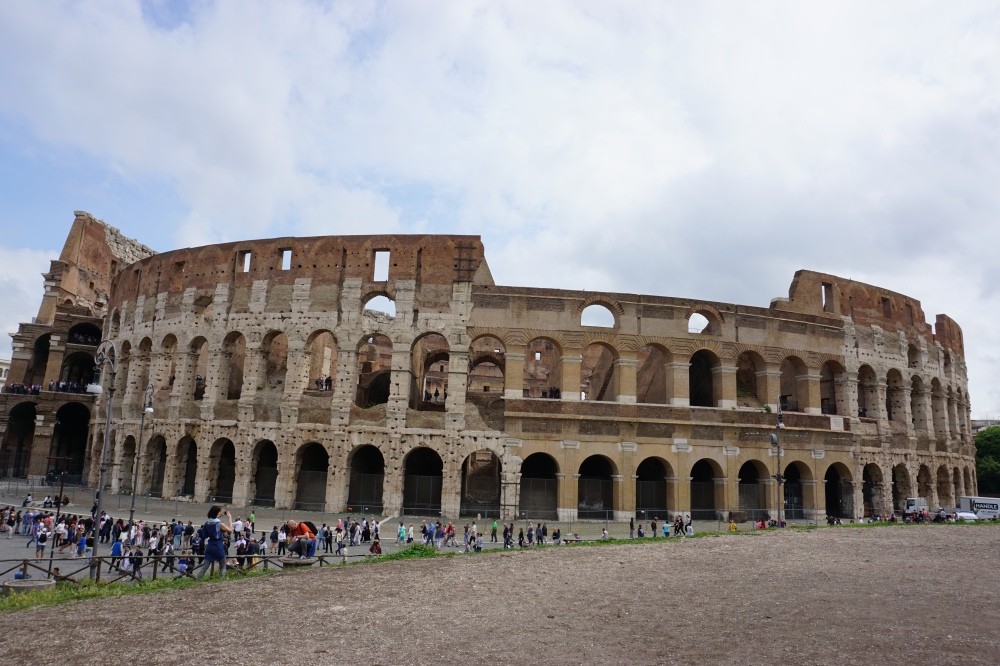 Our tour guide was a spunky old Italian woman named Isabella who ushered us through the security line with haste, which I appreciated. She told us lots of stuff, but the thing that stuck out the most was that the Colosseum was built in 10 years almost 2000 years ago. They built that whole thing in 10 years way back when and that church in Barcelona is still being built after 100 years!

We spent some time just admiring the massive structure from the inside and outside. It’s crazy to think that people battled each other to the death and only 2% of the gladiators lived. There was a famous quote they would say in Latin which translated to ” Your death is my life” because one of the people had to die (or they had to be a really good actor and convince the crowd they were dead). Gladiators were also forced to go into the arena with wild animals who would rip them to shreds. During the rise of Christianity in the 400s they stopped having people fight to the death because this was not a very Christian activity.

Isabella kept going on about the original marble floors in the Colosseum and also spouted some facts about stones from the Colosseum being used to build the Vatican. Interestingly, the Colosseum and St. Peter’s Basilica are the same length because the Christian king didn’t want anything to be bigger than the church.

Directly across from the Colosseum is the Roman Forum which we visited next. It’s basically a big open area with ruins in the middle and cool buildings all around it. We explored a little on our own, until we were starving and had to find some food. The forum was really confusing and had no exits so we wandered around aimlessly for at least 30 minutes looking for a way out. 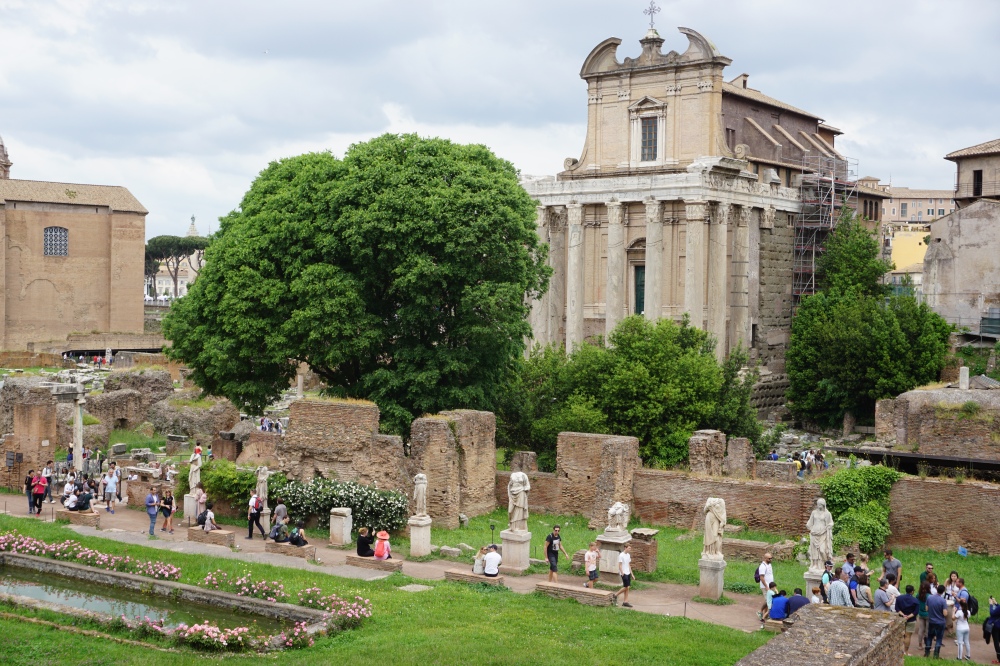 Tyler had done a lot of research on restaurants for the trip and none of them disappointed. We had lunch at Mimi e Coco and enjoyed a big platter of meat and cheese, which I followed up with lasagne bolognese that was probably the best I’ve ever had. Oh and wine, lots of wine. It started pouring while we were sitting in the restaurant, so we waited out the storm while enjoying another glass. The meal ended with some lemoncello and we were on our way.

Our goal for after lunch was to visit the Vatican, Spanish Steps, Trevi Fountain, and Pantheon. In the morning, we purchased a hop-on-hop-off bus ticket so that we could easily and quickly get around town. It was a good idea in theory, but we probably didn’t use it enough to warrant the purchase. We did however, take it to the Vatican which is on the other side of the river and kind of not near anything else. Because we had such a short time in the city (and Tyler and I had already been inside), we opted to view the Vatican from the outside. Although you can’t quite grasp the beauty of St. Peter’s Basilica from the outside, it still is majestic.

Another quick hop on the bus brought us to the Spanish Steps where we promptly stopped at a fancy hotel to use the bathroom and ended up with EUR 20 margaritas. We justified the price tag by the fact that it was Cinco de Mayo and the drinks came with a lot of snacks.

By this time, it was getting a little late, so we kind of quickly did the Spanish Steps and Trevi Fountain. I still think the fountain is one of the most beautiful things. We threw some coins in and made some wishes. If you throw the coin over your left shoulder you’ll be going back to Rome some day. If you throw a coin over your right shoulder you might find love. Take a guess which shoulder my coin went over. 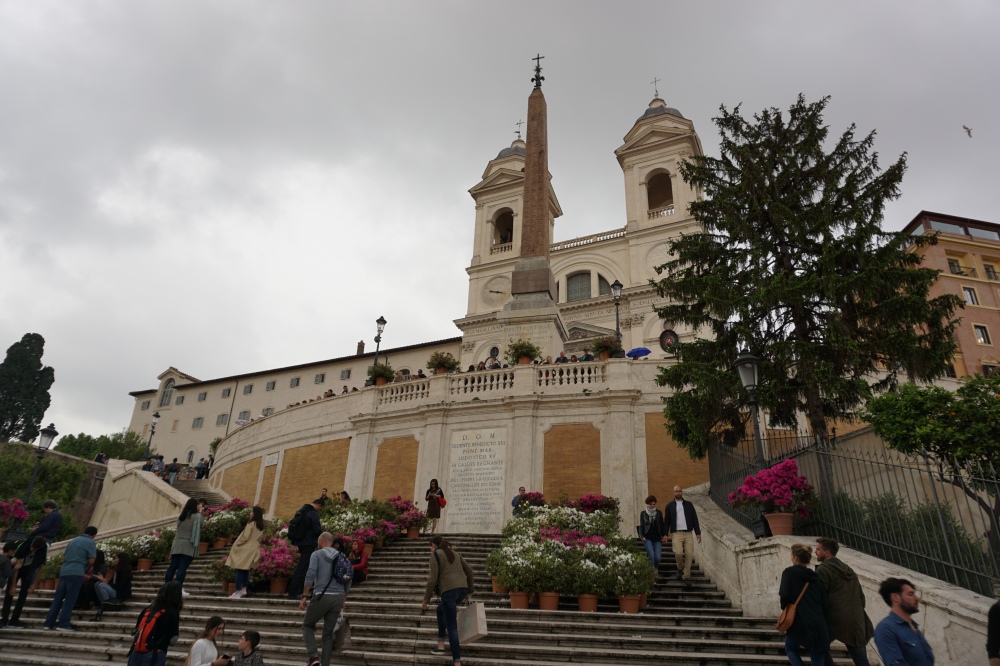 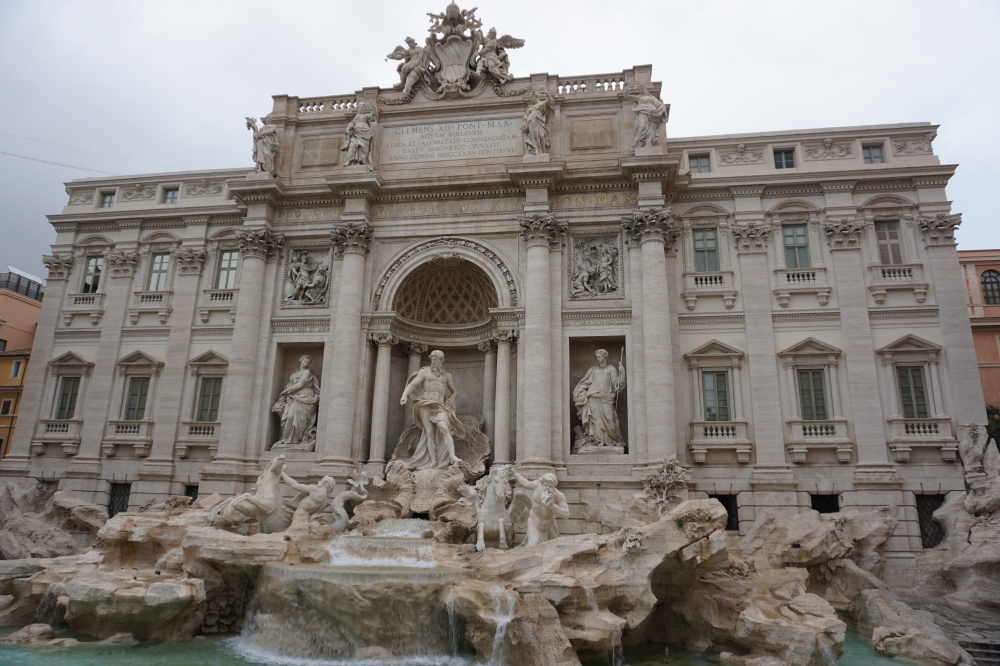 Upon the recommendation of a friend, we ate at Vecchia Roma for dinner. We arrived there at about 10:15 and there was still a huge line to be seated. Luckily we snagged a table because the food was delicious. I got this amazing gnocchi and the others got incredible pizzas. It was a great dinner with great friends and everyone left uncomfortably full. The walk back was also nice because a lot of the buildings were lit up beautifully. 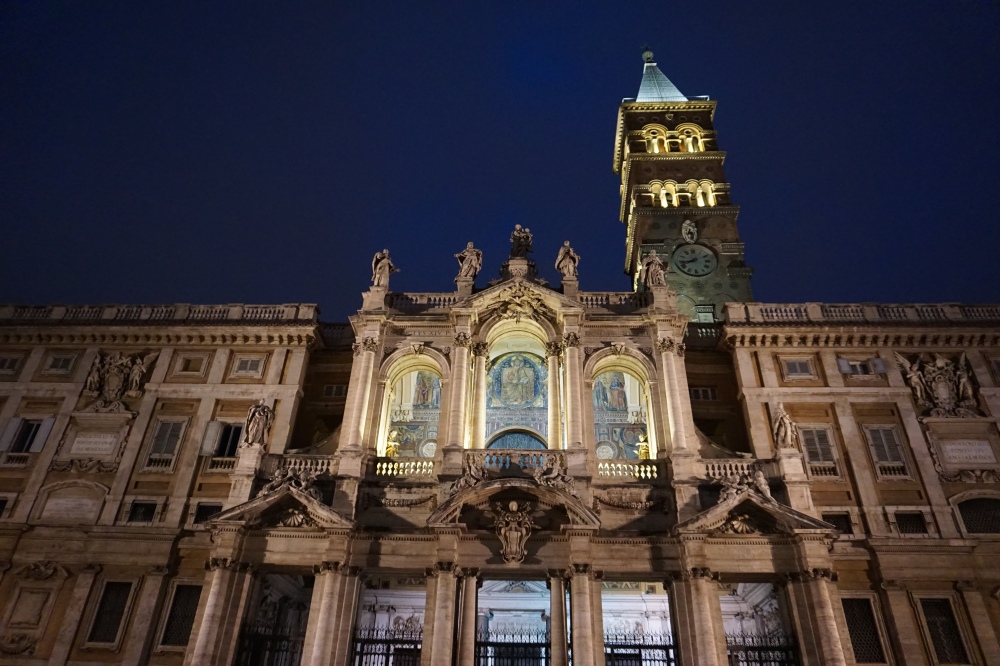 Our flight left pretty late on Sunday, so we had the whole day to explore. We hit a bunch of sites on Saturday, so the only thing I really wanted to see was the Pantheon. The Pantheon was under construction the last time I visited Rome, so it was something completely new to me. Originally built as a pagan temple, the now church has been in the hands of many different people throughout history, making it one of the better preserved Roman buildings since it was consistently in use. From the outside, you wouldn’t be able to tell, but in the inside there’s a huge domed center letting light in and drawing your eye upwards. 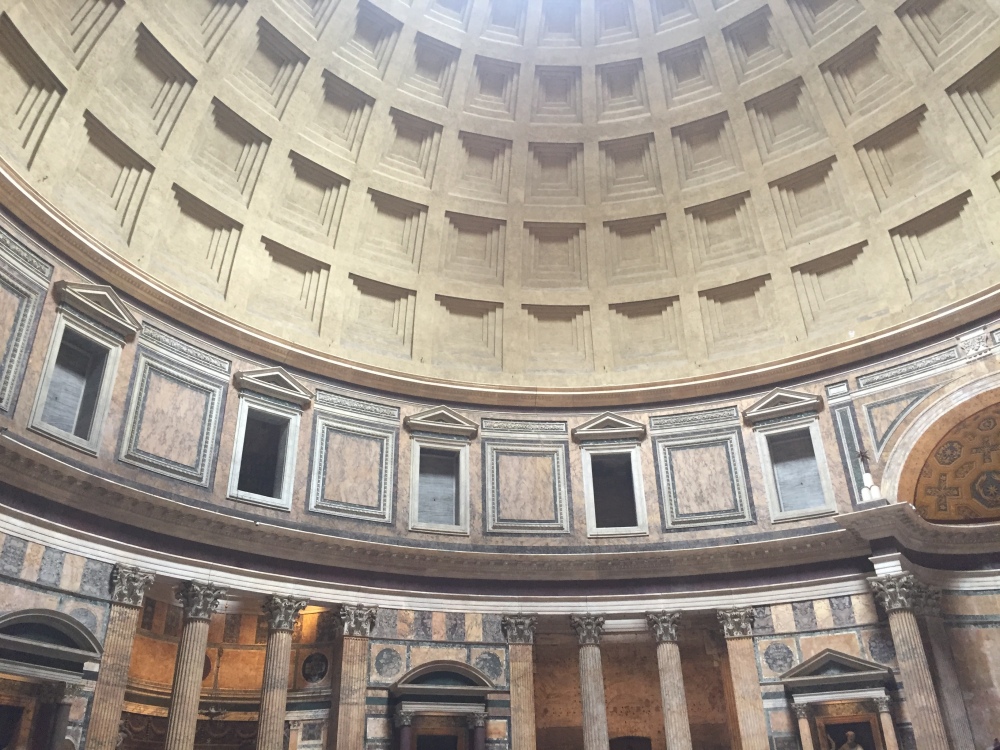 On our way to lunch after the Pantheon we ran into what what I had called the wedding cake building when I was last in Rome. Turns out it’s actually the Piazza Venezia! We only admired from afar, but I would love to closer examine this building one day.

When in Italy, eating is the most important pastime, so we made sure to do it right. Brunch consisted of delicious pizza and wine. 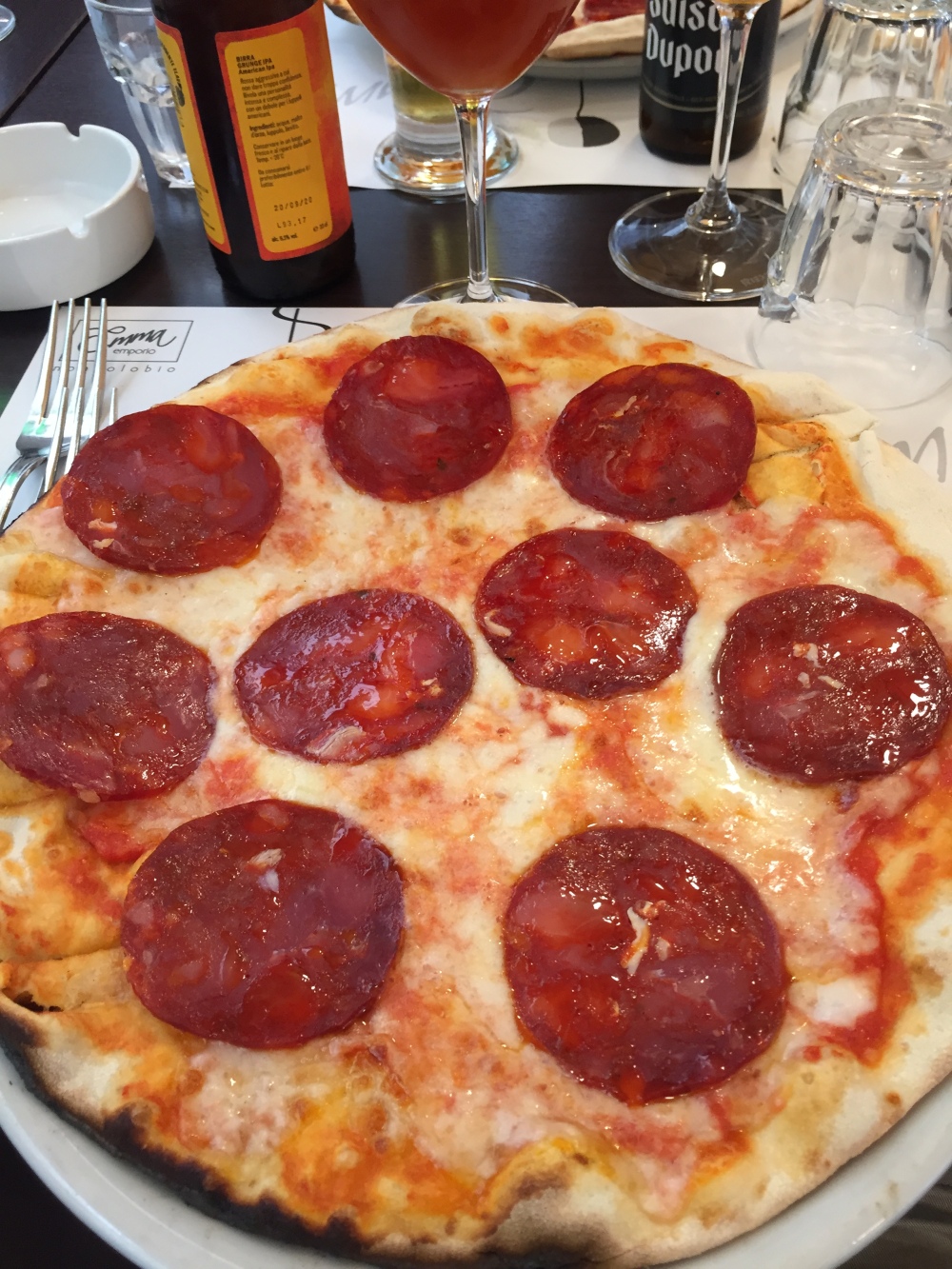 After lunch we realized we had not yet had gelato on the trip, which let’s be real is one of the top reasons to visit Italy. We headed over to Trastevere, a less touristy more hip area of Rome to walk around and score some delicious cold treats. I hadn’t been to this part of town before and wish we could have done more exploring because I really liked what I did get to see.

Unfortunately we had to head to the airport shortly after arriving. After having such a great time on our Portugal trip, this quick jaunt made me fall in love with Italy all over again.