What a great weekend of castles, skiing, sunbathing, partying, and 100 of your closest coworkers. I’m talking about the annual EY Ski Trip, of course. This year, the festivities took place in a small Austrian town in the heart of the Alps called Mayrhofen.

We flew into Munich and rented an 8 passenger van (shoutout to Chris who was the best driver) to make a pit stop at the Neuschwanstein Castle, which is the inspiration for the Walt Disney Castle. We hiked up to the top of the hill to get a closer look and also viewed the castle from across the bridge. 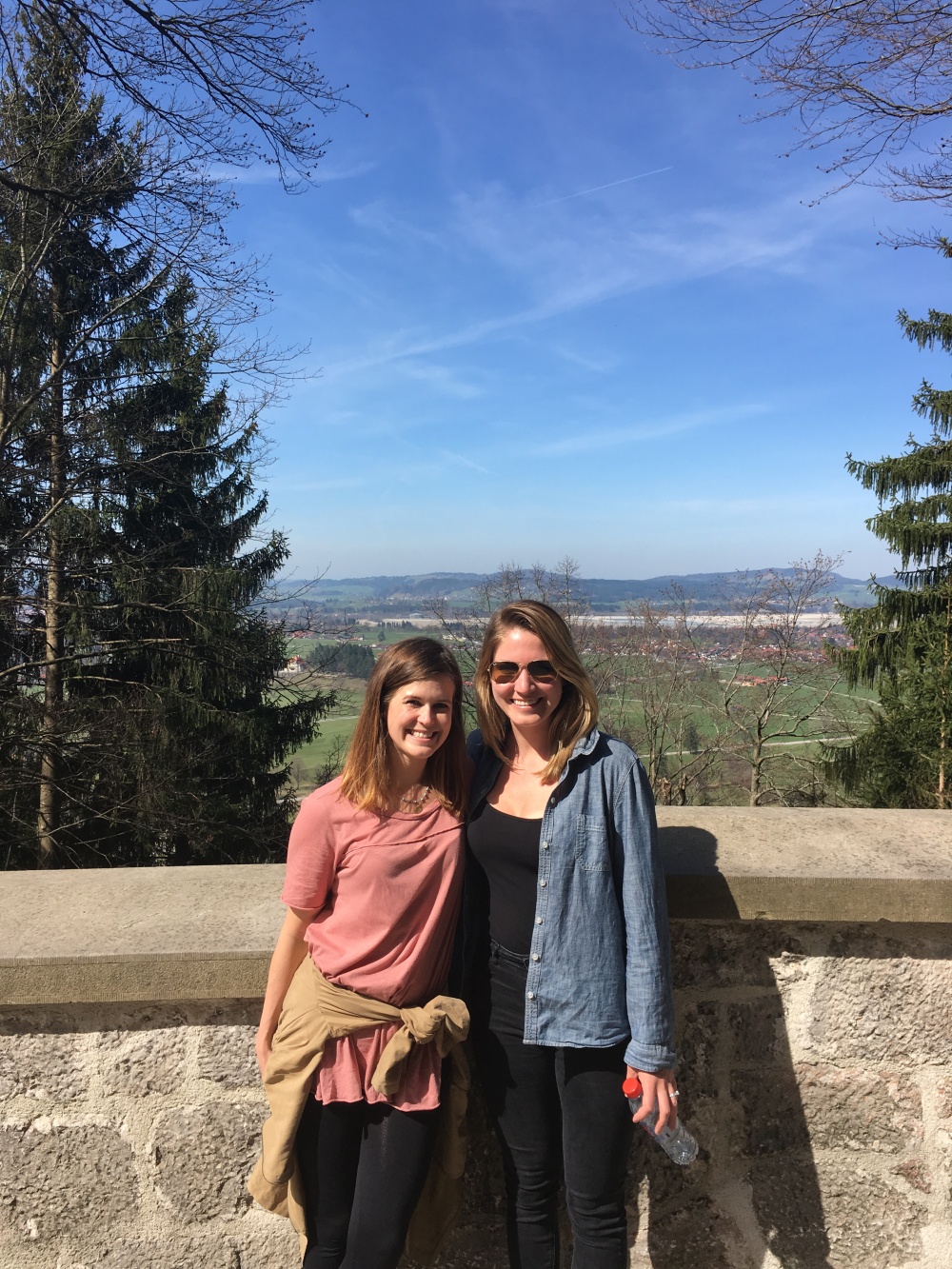 The views on the way from the castle to Mayrhofen were incredible and we pulled over on the side of the road to snap some pictures. 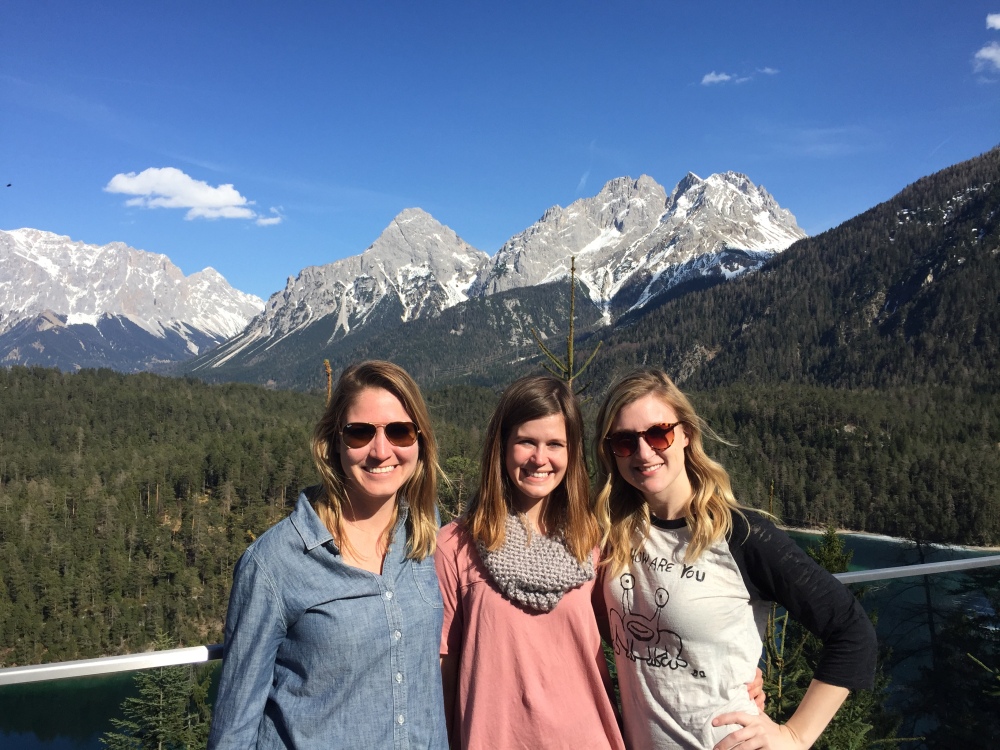 And we made a stop in Innsbruck for a few beers before the final destination. We were the only ones at the bier garten, but we didn’t let that stop us from having a great time. 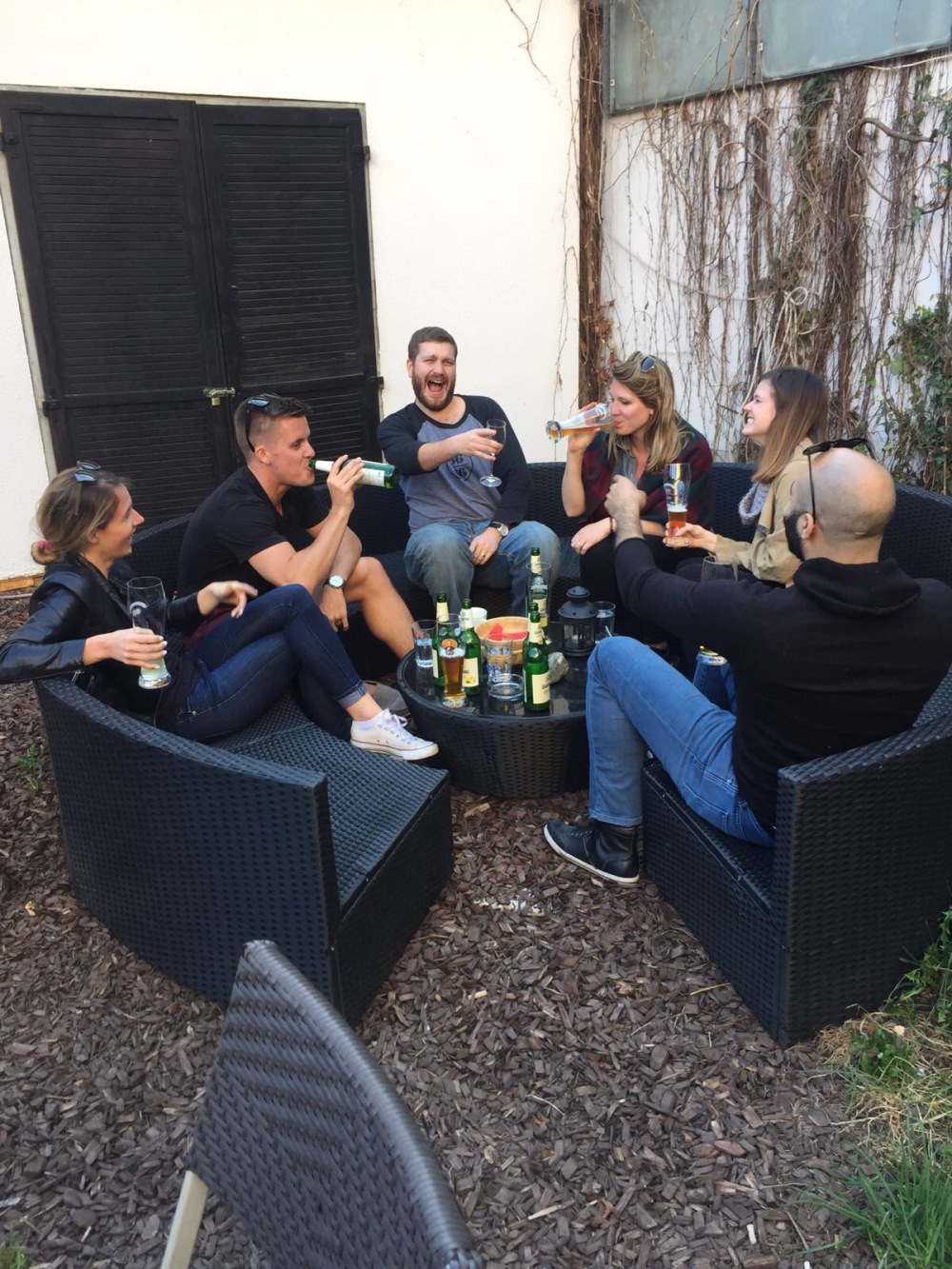 Finally, we made it to Mayrhofen. The city itself is in a valley, and to get to the top of the mountain you have to take a gondola, which was slightly terrifying if you’re not so into heights. 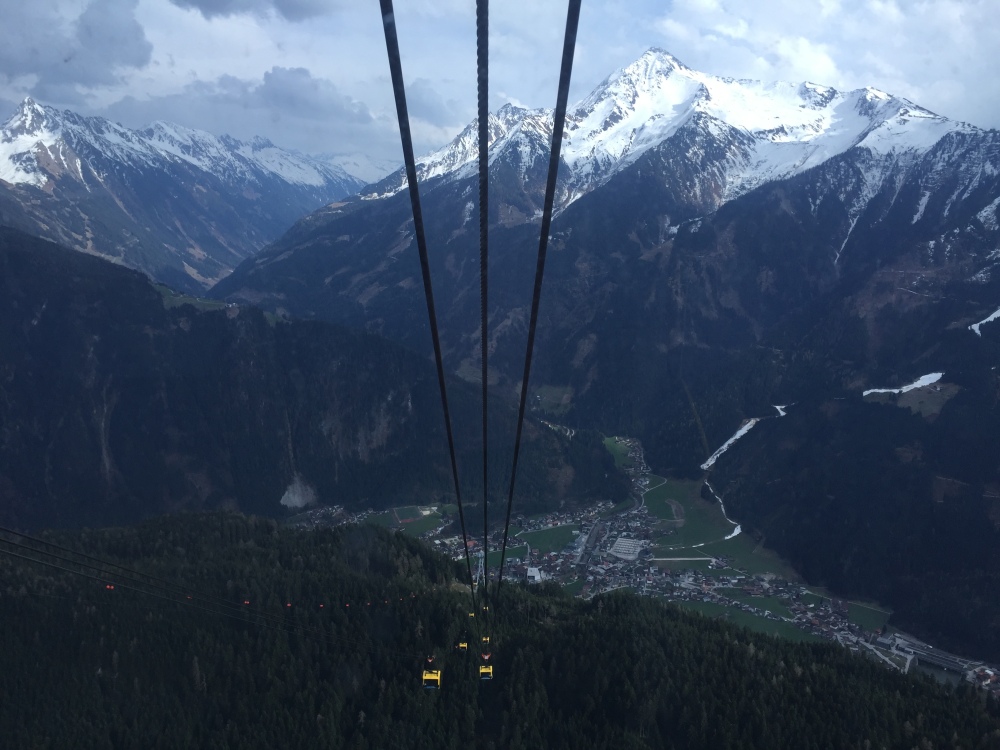 This is the view from the front of the gondola. See the city waay down there? and the other yellow gondola cars..

The first night we met up with the other EY’ers at the club that happened to be attached to our hotel.

We called it an early night so that we could get prepared for a full day of skiing on Friday. I polled my Instagram followers for any first time skier tips and the consensus was that ski lessons were a must, so Tyler, Noah, and I signed up for a 4 hour lesson on the slopes. 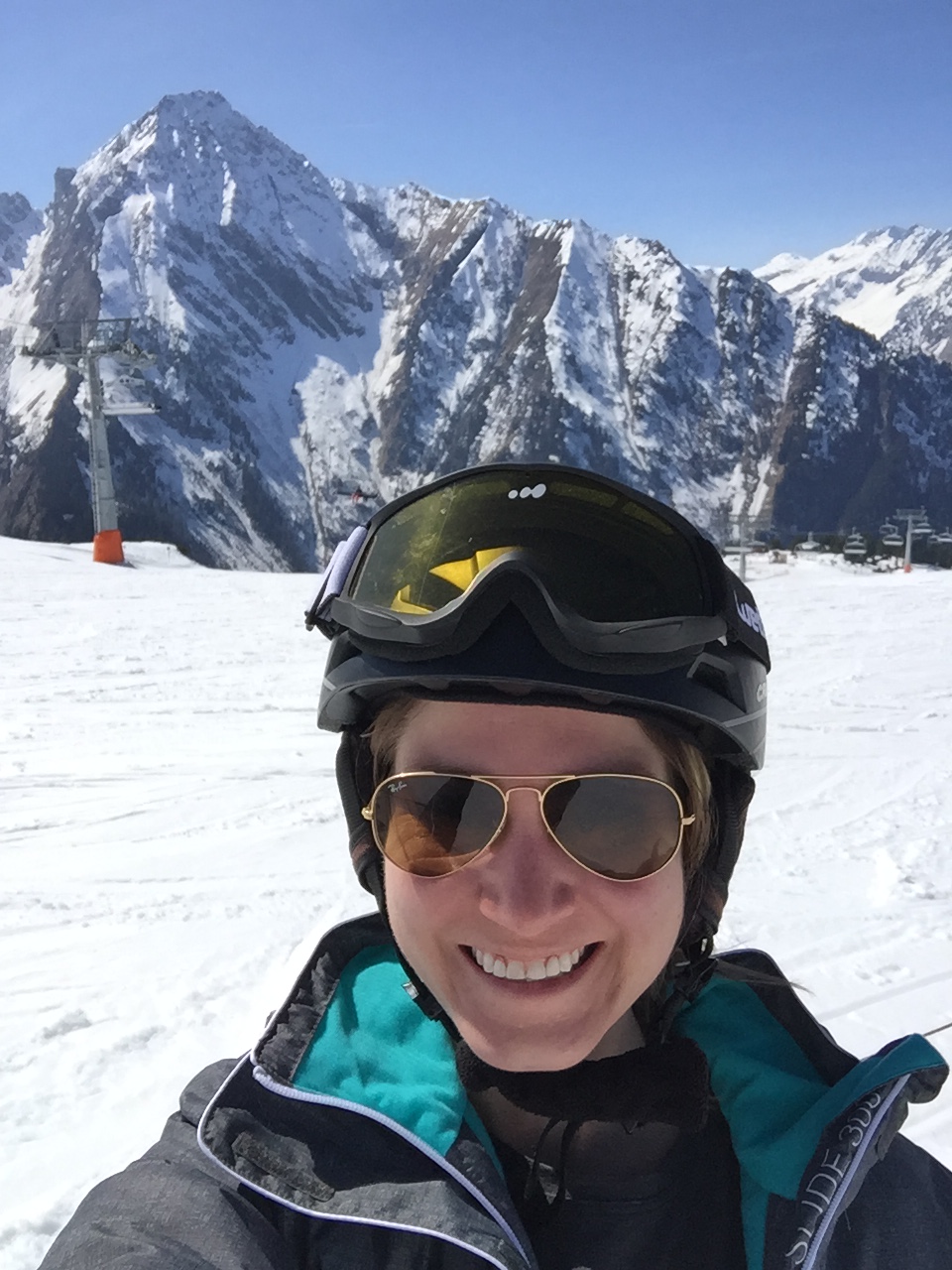 Boy were my Instagram followers right – the lesson was a must. I had absolutely no idea what I was doing with skis on my feet. It took the first 2 hours just to be able to glide around in the skis with no incline whatsoever. But after lunch, we graduated to the bunny slopes and I started getting the hang of things. 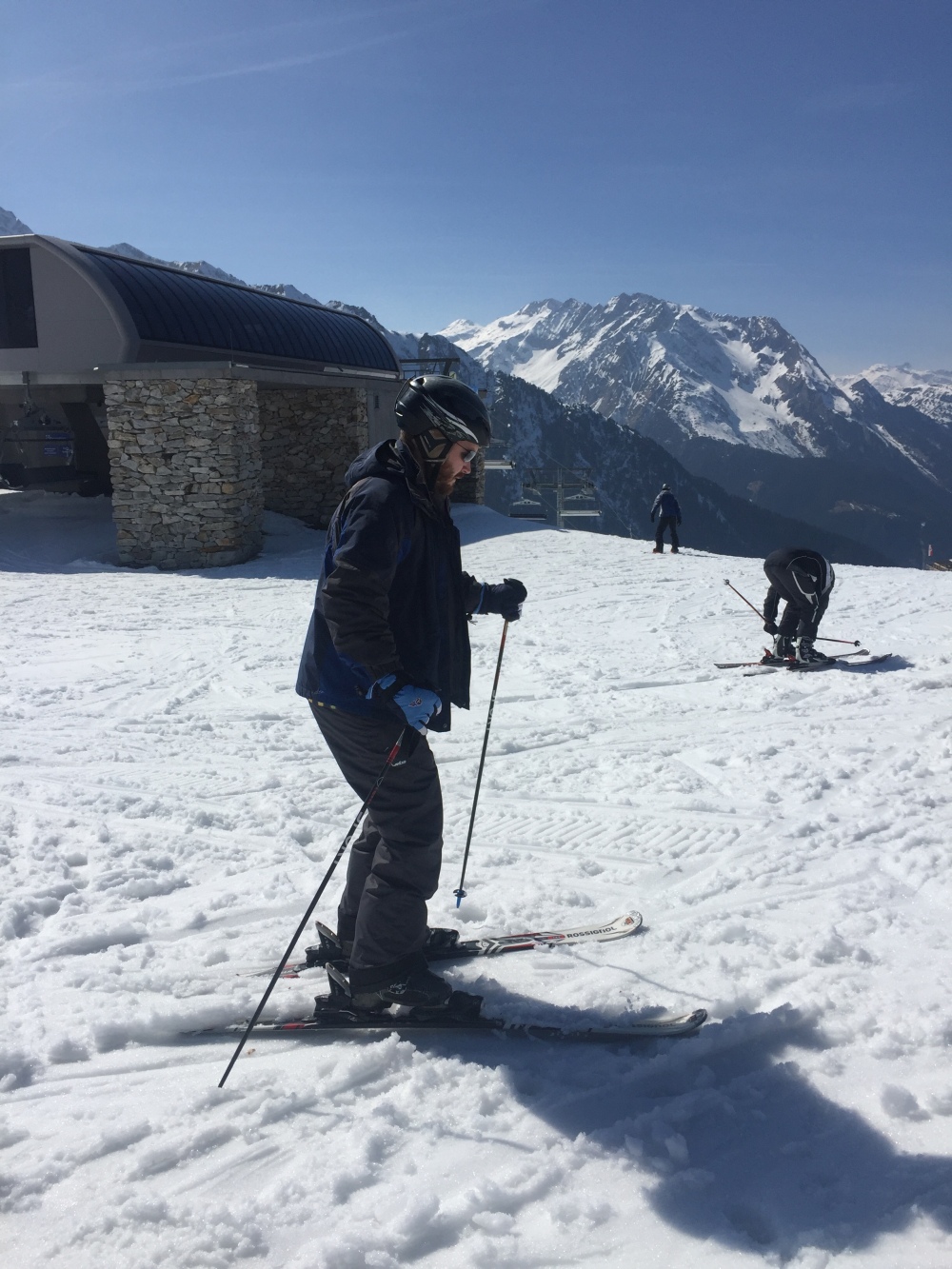 By the end of the day, Noah and I were gliding down the blues without falling too many times, and Tyler was enjoying the beer on the mountain. We all had a great time, and there were no injuries!

At the top of the mountain there was an igloo bar where we had some refreshments before heading back down the mountain.

What a successful day of skiing! While we were up on the mountain, the rest of the crew was in their bathing suits getting a tan since the temperature was about 75 F down in the town. We went out with the EY crew again and listened to the Johnny Depp song on repeat – the Germans really love that song. (here’s the link if you’re interested https://www.youtube.com/watch?v=CE70PHlgrlo ). Since the details of the party are pretty hazy, I’ll skip ahead to Saturday.

I debated on whether or not to do another round of skiing, but I woke up and was incredibly sore and the whole getting the skis and the boots and walking to the lift ordeal just seemed like it was too much. Besides, the skiers decided to go down the other mountain and I didn’t feel like I was ready for that kind of challenge. Instead, Tyler and I decided to go for a hike through the city and the mountains. I was happy with this decision as it was peaceful and beautiful. 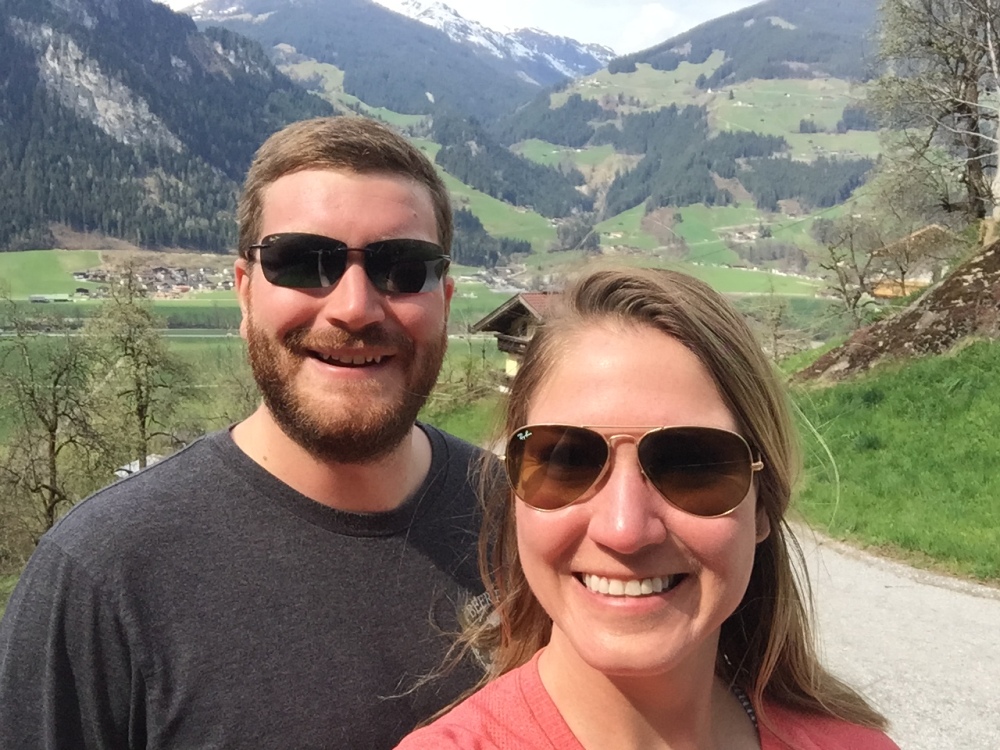 After the hike, we wanted to go up the mountain one last time, and ended up just watching people fall down this one really steep part. It was hilarious.

As it usually is, Saturday night was the biggest night out and we partied til the wee hours of the night at the club.

On Sunday we headed back to Munich to catch our late afternoon flight and got a taste of what a treat we are in for when we head back for Oktoberfest. We stopped at a lekker biergarten called Zum Aumeister (highly recommend you hit this place up if you’re in the area) and had some huge beers and even bigger pretzels. The weather was perfect and we sat around enjoying each other’s company before heading to the airport.

As always, I had a great time with a great crew. The main lesson I learned from ski weekend is that I can’t hang with the young kids anymore. Especially the Dutchies. Most of us came back with a sinus infection that is still lingering. Hopefully we will get better soon, because the 8 of us will be drinking Guinness in Dublin in t-4 days.